Ensenada: The made in Mexico 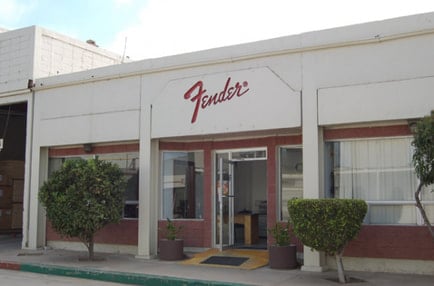 Ensenada Fender factory
Since Leo’s time, Hispanic workers, like the mythical Tadeo Gomez, Lilly Sanchez or Abigail Ybarra, had always been employed in Fender factories, so that the opening of the Mexican plant should not be surprising, mainly because it was only 200 miles from the US Corona factory.
The new factory, located in Ensenada, Baja California, opened on May 6, 1987.  A key role in the development of this factory was played by some employees of Fender Japan, who, through the F&F joint venture, trained the workers of the new factory.  Fender CEO Bill Mendello, interviewed in 2011, remembered: “Fujigen brought their machinery with them, plus five or six people. We opened up our Mexican operation, and Fujigen trained the people, using their techniques.  So the manufacture of guitars in Mexico was more Japanese-like than it was US-like. We had a few people from USA help them, but for the most part the training, the techniques, the painting, all were Japanese.”
At first, due to the proximity between Corona and Ensenada, there was such an exchange of human resources and components, that a guitar born in the US was often completed in Mexico, and, consequently, defining the nationality of a Stratocaster was very difficult.  Some Stratocasters built in Mexico in the '90s, such as the “California”, could indeed be considered USA/MEXICO hybrid instruments.
The first guitars with the “MADE IN MEXICO” decal appeared as early as 1991. They were not only Stratocasters made to Fender's specs, like the Squiers, but authentic Fenders made by Fender workers using Fender machinery, so that now it was possible to buy a quality Stratocaster at an affordable price, though the top of the production was still American, since the better woods and components remained in the US.
The Ensenada plant was enlarged after a bad fire hit it on February 11, 1994.  As President Bill Shultz recalls: “We were relieved that none of our employees sustained injuries, but the instantaneous destruction of the years of work that went into establishing this plant was overpowering”.  However, in less than a hundred days Fender built a new factory twice the size of the previous one: “Fender's ability to so quickly rebound from this disaster is a strong testimony to our quality workforce in Mexico, for without their help, assistance, and understanding, this accomplishment would not have been possible,” Bill declared.
Among the first Mexican series should be remembered the Standard Series (whose predecessor, the Standard Stratocaster, was the cheap answer to the American Standard), the Special Series and the Deluxe Series, in addition to the varied vintage style guitars, like the Classic Series, the Road Worn or the vintage/modern hybrids, like the Classic Player Series, all replaced by Vintera Series, and the many Artist guitars.