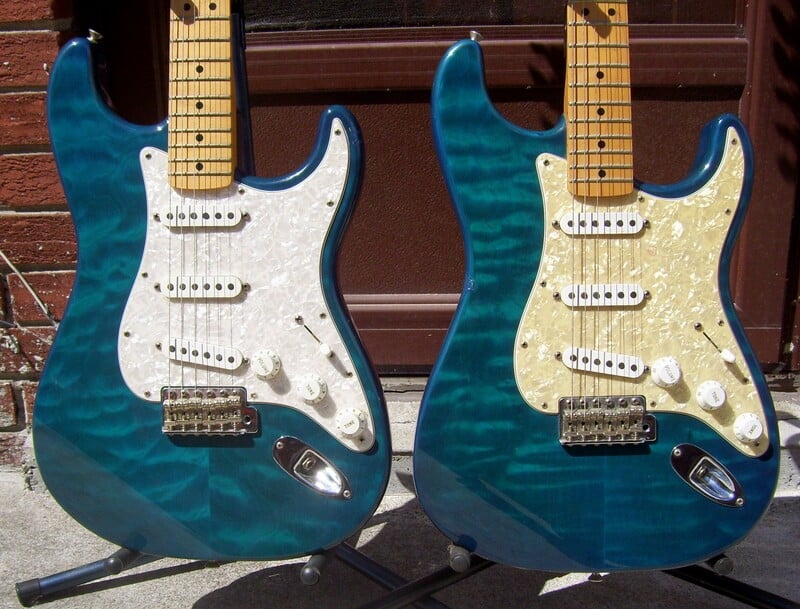 The Special Series and the Deluxe Series Stratocasters can be considered “premium” guitars made in Mexico.
The Tex-Mex Stratocaster and the Tex-Mex Strat Special, which differed from the previous one for the presence of a humbucker at the bridge, were guitars whose body came from Corona factory but was sanded and polyester finished in Ensenada; it was composed of several blocks of poplar covered by veneered top and back, at least in the sunburst models.
Their Tex Mex pickups, cheap but in Alnico, not ceramic like those on the Standard, had staggered poles and were well balanced.  On one side these pickups recalled the Custom Shop Texas Specials, but while the latter had top and bottom plates in vulcanized fiber, plain enamel wire and were dipped in a hot wax bath, the Tex Mex recalled much more the cheap Japanese pickups, with top and back in plastic, no dipping in wax, but overwound to be hotter.  “They're very high output, very punchy, with a lot of guts. But they still have the high-end sparkle that a strat should.  They're extremely aggressive, but not over the top,” explained Mike Lewis, Fender Marketing Director for Guitars.
The Tex Mex Stratocaster, which differently from the Standard Strat featured the Spaghetti logo, slotted vintage style tuning machines and saddles with double and reversed “FENDER” engraving (so that someone could suppose that it was made in the US), gave the idea of a '60s Stratocaster, but its medium jumbo frets and the almost flat fretboard made it more modern at the same time.
Jimmie Vaughan liked so much the Tex Mex Stratocaster that he chose it as base for his Jimmie Vaughan Tex-Mex Strat.

The production of the Deluxe Series Stratocasters, “premium” versions of the Standard Stratocasters, often equipped with better electronics, including boost circuits and better pickups, started in the late '90s.  Among the first guitars of this series should be recalled are the Powerhouse Stratocaster and the Deluxe Super Strat, introduced in 1997.
The first one featured Powerhouse Ultra-Quiet Single-Coil Strat Pickups, which had flat poles in Alnico connected to a Mid Boost circuit (12dB), and an additional dummy coil to reduce hum.
The Super Strat mounted Super Fat "Super" Strat pickups, essentially the same as the American Standard ones but slightly overwound.  They were controlled by the classic five-way switch and a push pull switch that activated the bridge pickup in positions 4 and 5.  It was replaced by the Deluxe Players Strat, which sported the Noiseless Pickups.
Among the "hot rodded" guitars of the Deluxe Series, unveiled in 2007, there were the Roadhouse Stratocaster, equipped with three Texas Special, not to be confused with the almost eponymous American Roadhouse Strat, and the​ Lone Strat Stratocaster, not to be confused with the American Lone Star Strat, distinguishable for the presence of two Texas Special single coils and one humbucker: at first the Seymour Duncan Pearly Gates Plus, and since the 2014 upgrade, the Fender Twin Head, splittable thanks to the S-1 switch on the volume knob.
This series included also “experimental” guitars, like the ​Big Block Stratocaster (2005-2006), black finished body with chrome pickguard, chrome knobs similar to those of the Telecaster, and large rectangular fret markers, and the 2006 ​Power Stratocaster, whose Fishman Power Bridge, equipped with Piezo, provided an acoustic sound.
More modern were the Deluxe Stratocaster Plus Top with iOS Connettivity, which could be connected to any Apple iOS, and the Fender Fishman TriplePlay Stratocaster HSS, equipped with a Seymour Duncan Pearly Gates Humbucking Pickup, two Vintage Noiseless single coils, and a special Fishman Hex pickup, that, together with the TriplePlay D-pad controller and the TriplePlay wireless controller, could send a MIDI signal to the included USB transceiver and a computer.
Antonio Calvosa 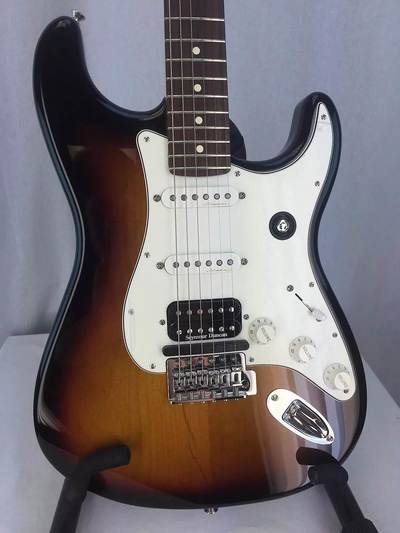 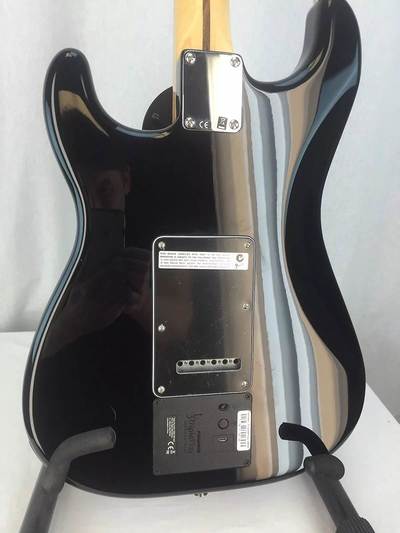 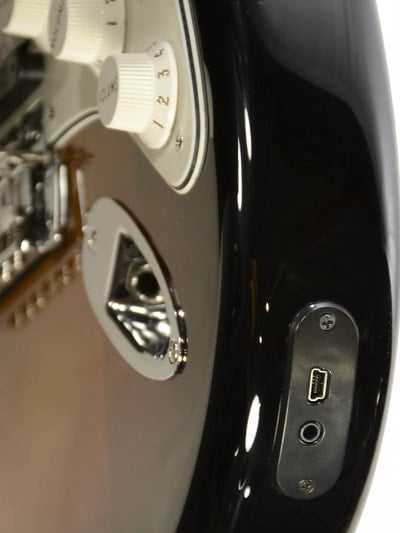 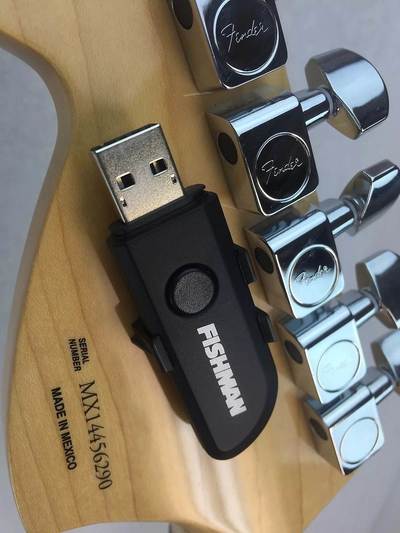