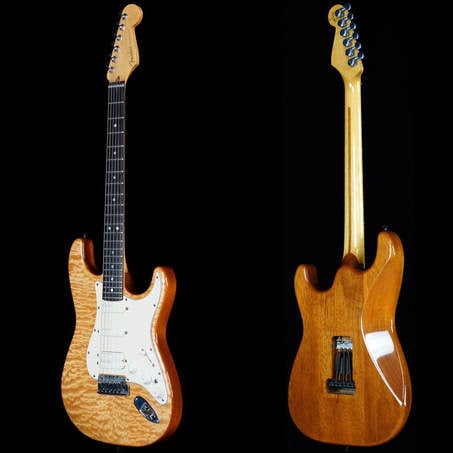 In 1992 the first Custom Shop series appeared, as a logical consequence of the introduction of its instruments in the price list.  The first ones were the Custom Classic Series, the Set-Neck Series and some Signatures (like the Robert Cray) which only a few years later were reunited in the Custom Artist Series to distinguish them from the factory signatures.  To these first three were added the Contemporary Series and the Relics Series, from which the Time Machines would be born in 1999.
​​

The Custom Classics were described by Fender as "Classic renditions of the legendary instruments that laid the groundwork for the sound, feel, and urgency of rock and roll today".
This series at first included the ​American Classic Stratocaster, Custom Shop version of the American Standard Stratocaster, the 1954 Stratocaster and the 1960 Stratocaster, modern reinterpretations of historical Stratocasters.  The latter two have been available since 1995 in the basic version and also one with gold hardware and/or flame maple top.
It is interesting to note that these “year specific” Stratocasters didn’t completely reflect the specs of the reference years, for example the radius was often 9.5", but they could be considered the first step of the Custom Shop towards the production of reissues able to get very close to the originals – a project realized in 1999 with the Time Machines.
During the years, other reissues extended the Custom Classic Series: the '69, available both with the rosewood fretboard and maple cap, the ​'58 and the left-handed models, the ​'57 and '62.
In 2000 the American Classic was replaced by the Custom Classic Stratocaster, available both in the “C” neck model and in the “V” neck one, and which, according to the color, could have an alder or ash body.
In 1998 also the Classic Player Stratocaster and NOS Stratocaster were introduced.
The Classic Player could be considered the Custom Shop version of the American Deluxe or an upgrade of the American Classic Strat, and it should not be confused with the Mexican Classic Players; it featured a 2- point tremolo bridge with vintage saddles, Sperzel Trim-Lok staggered tuning machines, abalone fret markers, plastic or anodized metal pickguard and Noiseless pickups (which in that period were considered premium pickups).  Like the Custom Classic, it was available both in the “C” neck and “V” neck models, and could have an alder or ash body, depending on the color.
The ​​NOS Stratocaster was a guitar that, according to the catalog, included the main features of the Stratocaster from the mid-1960s and was equipped with three Custom Shop '65 pickups, Abigail Ybarra (or "AY") signed, with staggered poles.

The first set-neck Fender guitars made in USA were the Custom Shop LJ, unveiled in 1991, made by Michael Stevens.  They weren’t Stratocasters, but had a specific design, and curiously, though they were Fenders they didn't have the Custom Shop logo on the headstock, but the “Stevens” one.
The Set-neck Stratocasters were introduced a year after, in 1992; they had a mahogany body with flame maple top and twenty-two fret ebony fretboard.  The Set Neck Stratocaster had locking tuners, roller nut (at first Wilkinson, then LSR), a Deluxe Tremolo System bridge (replaced by the Fender/Floyd Rose Tremolo System), Lace Sensor pickups - Blue at the neck and Red in central position, and a Dual Red at the bridge; the Floyd Rose Set Neck Strat, with reverse headstock, was equipped with two American Standard single coils and Di Marzio humbucker, and featured a Floyd Rose Pro Locking Tremolo bridge.  The new 1996 Set Neck Strat had an ash body with maple top, twenty-two fret rosewood fretboard, Schaller locking tuning machines, a Deluxe Tremolo bridge, two Texas Special pickups, and a Seymour Duncan JB humbucker.

The Contemporary Stratocaster, made between 1995 and 1998 in the Custom Shop, were guitars that harkened back to the old H.M. Series, Heartfield guitars and Japanese import Contemporary Strats, and were conceived to conquer the hardest shredder market.  Available also in the flame maple top version, they all had a slightly smaller and sharper body equipped with two Texas Special single coils and a Seymour Duncan JB humbucker, controlled through only two knobs - a master volume and a master tone.  Unlike the Set-Necks, the neck was attached to the bridge through a 4-bolt contoured neck plate, and they featured a Fender/Floyd Rose bridge, and, since 1996, a Deluxe Tremolo.
The mind behind the Custom Shop Contemporary Series was that of John Shur who, before joining Fender, used to build guitars at the Rudy's Music Shop in New York. His Pensa-Shur guitars, appreciated by many famous guitarists, including Mark Knopfler, had a body similar to that of the Stratocasters but slightly smaller and more modern, though not heavy metal oriented as that of the Jacksons.  With his arrival at Corona, he brought his design with him, strongly influencing the Contemporary Strats.

Custom Shop Contemporary Stratocaster (Courtesy of Only Guitar)
The Carved Top Stratocaster, which entered the market in 1995, was a direct descending of the Contemporary; it was characterized by an ash strat-like body with a maple carved top, which, at John Page’s request, wasn’t as small as that of the Contemporary.  John Suhr, while drawing the guitar, respected his chief’s will, but he remained convinced that a carved body of that size wasn’t particularly proportionate: “To mount a carved top on there, you need more of a corner, but if you reduce the radius and keep the body size, it looks too big.”
The Carved Top Stratocaster, built together with Gene Baker, featured two Texas Special pickups and a Seymour Duncan humbucker, didn’t have pickguard, and sported only two chrome knobs: a master volume and a master tone.  It's interesting that, according to Fender catalogs, the humbucking pickup was a Seymour Duncan JB, although it actually had two rows of fillister screws like the Seymour Duncan Allan Holdworth signature pickups.
​This guitar was joined in 1998 by the model with two Seymour Duncan covered humbuckers and by the new Showmasters (that weren’t labeled as Stratocasters), set-neck guitars with a smaller carved body, just like John Suhr wanted.
Antonio Calvosa