EXtrad Strats, 1993 Twang catalog
The ExTrad Stratocasters appeared in 1986 on the Japanese Fender "Twang" catalog as a category of the Collectors Series and, in the latter half of 1989, they were officially formed the "ExTrad Series". They were intended only for Japanese domestic market, not for export, hence today they are not so easy to find in USA or Europe.
ExTrad stood for "extra traditional" because these guitars were not just replicas of vintage guitars, but they were the best of the entire Japanese Fender production.
They were custom-order guitars, therefore their specs can vary a lot, as declared in the 1992 catalog: “These basic models are just samples. You can specify any option. Please contact Fender Japan's authorized dealer for the estimate.” You had a choice of fine tone woods, special pickups, high figured maple neck, mint-green parts, gold hardware, and all lacquer finish. Everything was designed to be seriously elegant and sonically spectacular.
There were three Stratocaster types, '54, '57, and '62; each one could have an alder or a light ash body, for a total of six models available in the lineup. But, since these were custom order guitars, you could ask for many different ExTrad Strats, and the final price fluctuated depending on the selected options.
In 1992 a special ExTrad Series 35th Anniversary '57 Stratocaster were made to commemorate the 35th from 1957. It sported a 2-Color Sunburst lightweight ash body, a beautiful bird's eye maple neck and a commemorative neck plate. 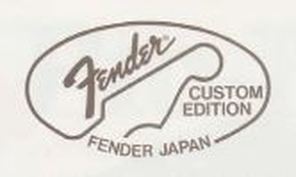 Japanese "Custom Shop" Logo
Extrad guitars were made by a small Custom Edition Team, a sort of Japanese Custom Shop, established by Makoto "Nick" Sugimoto. He is a luthier who had worked for twenty-three years in R&D, custom guitar building and engineering at Fujigen factory, and that in 2002 started manufacturing guitars and basses with his uncle as the original brand Sugi Guitars. The team consisted of highly skilled craftsmen; they studied and analyzed Fender guitars and basses a lot, had active relations with Fender USA, used only selected materials and took special orders from guitarists and bassists.
Extrad Series was listed in the catalog every year until 1994, when it disappeared. Although it was only a short production period of only 8 or 9 years, the quality of ExTrad Stratocasters could match (and sometimes surpass) that of the US Custom Shop models, making the world aware of the mastery of the Japanese craftsmanship.
There is a lot of confusion about these guitars in the US and Europe. First of all, how recognize them. Obviously you can check the serial number and the certificate of authenticity. Unluckily, many of them are lost, so you have to find other ways. The earliest models (1986-1987) do not have any logo on the back of the headstock.  The following years, from 1988 to 1991, the "ExTrad" logo was affixed on the back of the headstock. From about 1992 this decal was replaced with the "Custom Edition" one. Next, remove the neck and pay attention to the neck pocket. You can see stamps representing ExTrad model types such as ST-54, ST-57, and ST-62, and stamps such as Ⓢ, Ⓝ, A, T, or D. Usually, on the neck end, the date of manufacture is written in pencil.
Antonio Calvosa