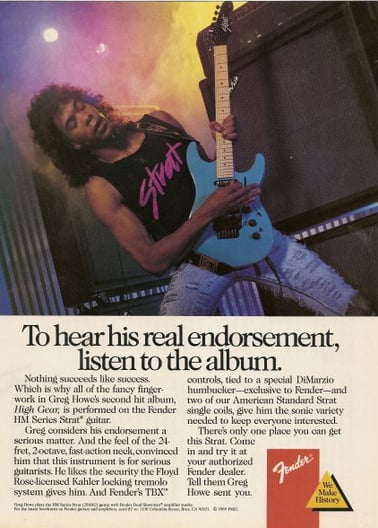 In the first difficult years that followed the closure of the Fullerton factory and preceded American Standard’s introduction, Japan not only supported Fender by producing lots of guitars for the American market, but also contributed to Stratocaster’s evolution through the introduction of small "modernities" that were in line with the growing use of the vibrato bar and with rock music carried to excess, thus inaugurating the era of the Superstrats. ​

Contemporary Stratocasters appeared for the first time in the 1983 Japanese catalog under the Squier brand and were only for the internal market.
The first models initially had a "JV7xxxxx" serial number - although these guitars are not considered by music lovers and collectors real JV Stratocasters - after which followed those with the serial number starting with “SQ” (strangely!) and “E”.  They were all characterized by a painted headstock with “Squier” and “Contemporary Series” logos, in addition to “by Fender” and “STRATOCASTER” decals in large letters, and were very different from the typical Stratocasters.
Although the alder body was the same as the classic JV’s, they were actually designed for metal lovers - "For the metalist," the catalog stated.  There were at least thirteen different models, all of them characterized by a flat fretboard, medium jumbo frets, and many pickup combinations (humbucker Dragstar or single coil Hot Rod) and some had the butterfly string trees, while others did not.
In addition to a 6-screw bridge with block saddles, a new tremolo system first appeared in this series: the Rox System, composed of the Upper Rox string clamp and the Bottom Rox bridge, equipped with roller saddles, in which the strings locked inside the steel tremolo block called End Rox.

The snap-in tremolo arm also locks the bridge to make it non tremolo. Allen Wrenches for height and intonation adjustments are hidden in the tremolo arm.”
You can also lock out any roller movement you prefer.  Separate screw adjustment allows you to choose easy or resistant tremolo arm rotation. [...]  Our "pro" traditional models include no wrench string lock as standard equipment.”
Comparison between string lock systems of the Superstrats

In 1984 the new domestic Boxer Series was developed as an evolution of the Contemporary Series and to bring Fenders to a new era.  In fact, simultaneously with the production of the Contemporary export models, the Contemporary Series was replaced, for the Japanese domestic market, by the Boxer Series.  Unlike the previous Contemporary domestic, the Boxer Series was Fender branded, like the exports.
These models featured modern specs such as high output pickups, TBX tone control and 22 frets.  The medium scale was adopted for some models.
The bridge of these guitars could be the classic Vintage Style, the Blade Shooter Tremolo (identical to the Fender System I), the Fender System II or III or the Kahler Fulcrum Traditional Tremolo.
Boxer Series was discontinued in 1988 and, in 1989, this series was replaced by the new Pro Feel Series.  Like the Boxer series, it created an unprecedented view of the world of Fender.  Improved playability in high positions was obtained by adopting 22 frets and a cut and deep neck heel with asymmetrical neck plate.  Other features included new bridges such as Kahler, End Rox and the Floyd Rose licensed ExTrem.  Pro Feel Stratocasters featured modern specifications to stand out from the vintage style Strats, such as Lace Sensors, Hot Rod, Dragstar, and Di Marzio HS-3 pickups.  Medium and short scales were adopted for some models. The first HM Strats appeared in this series for the Japanese domestic market.

The first to enter the Fender catalog in 1988 were the Japanese  ​HM Strat, followed in 1989 by the US HM Strat, and, a year later, by the new ​HM Strat made in Japan.  They were all available in different and mostly bright colors.

The following year production was moved to the United States. It’s not easy to distinguish the HSS type made in the USA from the Japanese one, as the "made in Japan" decal is not always present or reliable and as they are identical guitars, except for the Di Marzio and American Standard pickups in the American ones and some different finishes. Among the US HM Strat we should mention the ​HM Strat Ultra, with an ebony fretboard with triangular markers, Lace Sensor pickups and Kahler Spyder Tremolo

Floyd also recalled that Fender was the first company that he approached after getting his first patent:  “The people there at the time just weren't interested.  But in the past few years, Fender has changed hands and, in the process, has recaptured the quality and innovation that made me go to them in the first place.  I couldn't be happier that we are finally together.”
​“There's a real difference between a tremolo designed by Floyd Rose himself, and the rest.  The most popular tremolo bridge ever created,” as Fender advertised Floyd Rose systems.  The Pro bridge had the same construction as the Floyd Rose Original, but the bridge plate is die-cast, rather than case-hardened steel, which provided a mellower tone.  Also, the advert pointed out that it had a modified shape: “a lower profile to accommodate the right hand” and “wrenches and screws featured large SAE threads, for increased strength and longer life.”​
Late '80s HM Series advertising with Greg Howe

Finally, the ​US Contemporary Stratocaster were guitars designed by Fender as a modern evolution of the Stratocasters.  Unfortunately not much is known about these guitars.  They were assembled in U.S.A. using mostly Japanese components.  Indeed, both the neck, without any decal indicating the origin, and the figured maple top and back body really look as if they were made in Japan.
These guitars featured a twenty-two fret fretboard, Gotoh tuning machines, contoured neck plate with the "Fender U.S.A." engraving and equipped with micro tilt, Kahler bridge with the locking nut, and a split-able humbucker at the bridge along with two single coils.

Don't forget the Contemporary Strats made by the USA Custom Shop in the '90s, to which a separate chapter has been dedicated, ​and the 2020 "reissue" Limited Edition HM Strat.
Antonio Calvosa