The headstock of the Fullerton Vintage reissues was “Dan Smith style”, like that of the Standard Strats of the first '80s, which was very different from that of the 1957 and 1962 original Stratocasters.
However, with the relocation to the Corona factory and the stocks of the neck with Dan Smith headstocks run out, Fender proposed a new, smaller, headstock, which was slightly elongated and rounded, though not like that of Fullerton.  These were frequently called the “pregnant headstock”.
With the total review of the series wanted by Mark Lewis in 1998, simultaneously with the release of the Time Machine Series, the American Vintage reissues headstock was finally realized according to the correct design, thanks mostly to the studies on the pre-CBS Stratocasters conducted by the master builder Michael Stevens.

Fender used three different batch of decals, all of them applied over the finish, like Fender used to do in the '50s and '60s.
The first one could be found on Vintage Stratocasters made from 1982 to 1986; Fender logo had pointed "e" and decal borders were straighter and did not follow the letters contour very much.
The second one appeared in 1986 and gradually replaced the first one; the new Fender logo had not the pointed "e" and decal borders were closer to the letters and followed their contour more than the first one.
But another batch of decals where the printing was off a bit was used in 1982 and 1983. It was very different from the previous ones because the word "STRATOCASTER" was very far from the "WITH SYNCHRONIZED TREMOLO" part. The letters were larger and a slightly different font was also used (note letters "R", "C" and "M").  Fender logo was also different: "e" letters were both pointed, but they intersected the "F" and the "r".  Probably this strange batch of decals was ordered and Smith and other Fender chiefs decided to use it instead of trashing it, because they were more concerned with getting the "vibe" of vintage Stratocasters than really being accurate with them. 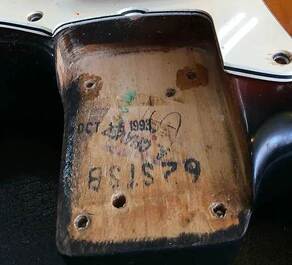 The Vintage Stratocasters bodies were made of alder, both for the ’57 and ’62.  However, between the end of 1987 and 1989, it was possible to buy the "Mary Kaye" version of these Stratocasters, with ash body, blonde finish and gold hardware.
Made in Corona Vintage Stratocasters bodies featured a top contour deeper than that of the Fullerton reissues, and, seen from the side, the contour appeared decidedly sharper, less rounded and blunt.  However, the first reissues released by Corona factory could still have the bodies advanced from Fullerton’s production (very few) or the new ones built using the same Fullerton templates.
At first Fender had many space problems due to the insertion of pickups and electronics in the body routes; consequently, it is possible to notice on the very first reissues made in 1982 a further excavation in the control cavity and in that of the pickup at the bridge, easily recognizable because it was made after the finish was applied.  However, at the end of the same year, Vintage reissues bodies were fabricated with larger cavities that could easily accommodate pickups and electronics.
Every Vintage reissue made in Fullerton and the first manufactured in the new Corona factory had two extra holes, usually diagonal, drilled into the neck pocket.
1982 "Fullerton" (Massimo Salmoiraghi) vs 1988 Corona (Francesco Palmitessa) vs 1983 JV (Paolo Bassi). It is clear that the top contour is deeper on the Corona reissues than that of the Fullerton Stratocasters and that, seen from the side, the Corona contour appears decidedly sharper and less rounded. JV Stratocasters has a very deep contour, too.

Also for the Vintage reissues, like the pre-CBS Stratocasters, serial numbers cannot be used for dating, though they can give an idea of the period in which the guitar was made.  The best way to date a Stratocaster is to search on the instrument dates or numbers that allow tracing the year of production.  Obviously the starting point is the date shown on the heel of the neck.  Between 1982 and 1988 the date on the neck was always written in pencil and was only numerical (MM-DD-YY).  From 1988, and until the end of the '90s, Fender began to stamp the necks (often with black ink) indicating the month with three letters, so that they had a date in the format MON-DD-YYYY.  This kind of dating joined the classic one in pencil with the numeric month.  However, it wasn’t rare that the neck was left undated, mostly in the late '80s, or without the last number indicating the year.
The first Vintage Stratocasters did not have any dates on the body; only rarely did some Fullerton reissues have the date printed in the back cavity for the tremolo.  From 1987, Fender sporadically began to mark the date in the neck pocket.  This habit became more frequent in the '90s.
In the neck pocket sometimes a sticker was applied which contained, in addition to the Fender logo, the serial number which started with “V” which was also engraved on the neck plate.
In general (but there are obviously important exceptions) the serial numbers followed the scheme of the following table:

All Vintage Stratocasters had, at least initially, a nitro finish with a polyester undercoat.  The basic color of the ’57 was, obviously, the two-tone sunburst, while that of the ’62 was three-tone, but custom colors as Lake Placid Blue, Fiesta Red, Vintage White, Candy Apple Red and Black were available.  However, only a small percentage left Fullerton factory with a custom color.
When the manufacturing was moved to Corona, production of custom-colored Vintage Stratocasters increased a lot and new colors like the Surf Green, Daphne Blue, Ocean Turquoise and, in 1997, Shoreline Gold, were also added.
Between the end of 1987 and 1989 it was possible to buy the Mary Kaye version, made in limited edition, with Blonde, finished ash body and gold hardware.
​

Pickups of the Vintage Stratocasters were all staggered poles.  The very first 1982 reissues featured red bottom single coils, which could be considered premium pickups.  Their date of production was printed on the bottom plate.
It was also possible to find, on the same guitar, combination of red, grey (rarer than red), or black bottom pickups; the last ones gradually became more common on the Vintage Stratocasters.  Only black bottom pickups had white or black cloth covered wires; reds’ or greys’ wires were plastic coated.
The tops of the magnets were ground flat; only from 1998, with the new American Vintage Stratocasters, did reissues pickups have rounded top edges.
Vintage Stratocasters pots were all CTS, on which the date of production was always marked according to the YYWW (year/week) code.
Fullerton reissues featured large and orange (rarely black) Sprague capacitors, often slightly different from each other: those of the first Stratocasters were more cylindrical; more squared models were used later.  Then red or orange smaller capacitors were preferred.
Switches were the three-way Oak Grigsby MX49161 6MLR; however, the five-way CRL ones were also furnished along with the guitar.

Reissues necks were “slim” and covered with a thin layer of nitro.  Decals were applied on top of the finish, so it’s not difficult to find them ruined (differently from those of the Japanese reissues, which were covered with a clear coat).  Differently from the ’57 and ’62 original Stratocasters, fret markers at the twelfth fret were narrow.  It is interesting to note that for the Japanese reissues the distance was vintage-correct.  In 1998, with the introduction of the American Vintage Series, Fender began to make American reissues with the wide dot spacing in order to better imitate the originals.
​

Reissues pickguards were white plastic until 1998, when, with the American Vintage Series, they were replaced by a green mint one.  That of  the ’62 was three-layer and equipped on the back surface with a large aluminum shielding sheet; that of the ’57 was mono-layer and covered with a thin shielding layer only in the potentiometers and capacitors area.
At first Fender missed the position of the upper screw, which was placed above the central pickup; this mistake was corrected in the same year.
Many of the first reissues exhibited the initials "JC" handwritten on the back surface.  This was thought to refer to John Cruz, but he started work at Fender on 23 October 1987.

1982 Vintage reissues featured a bridge aesthetically similar to the pre-CBS one, on whose saddles were stamped the words "FENDER"/"FENDER".  At first this engraving followed the same direction from both sides, but, gradually, since 1989, new saddles were introduced which had the "FENDER" engravings in reverse directions.
In 2013, with the renovation of the American Vintage Series, the engraving on the saddles changed to "FENDER"/"PAT.PEND.", imitating that present on the pre-CBS Stratocasters, and the old knobs were replaced by the "eggshell" ones, whose numbers were smaller.