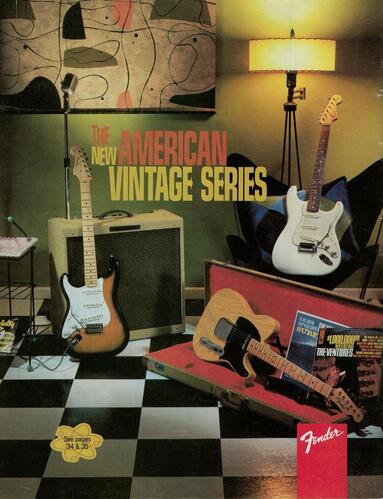 In the new American Vintage Series neck shape and headstock contour were finally more similar to those of the original Stratocasters; some 1961 pickups were analyzed and copied and also the distance between the fret markers at the twelfth fret was widened to imitate that of the first Leo’s guitars.  Moreover, the body of the new guitars too was refined according to the studies and the development of the American Deluxe Series.
In 2006 the ​American Vintage '70s Stratocaster was presented: it continued the main features of the CBS period, like the 3-bolt neck plate with Micro Tilt, “F” tuners and the typical big headstock with the Fender logo of the '70s, and the bullet truss rod.  The body could be ash (with transparent finishes) or alder and the neck shape was a large “U”.

In August 2012, the historic reissues '57 and '62 retired together with the new '70s. They were replaced by the new​ American Vintage '56 Stratocaster, American Vintage '59 Stratocaster and American Vintage '65 Stratocaster. It is possible to find the motivation for this important decision on Fender catalog: “Today, Fender has boldly cleared the slate to make way for a fresh American Vintage series with new features, new specs and the most meticulous level of vintage accuracy yet.  Rather than just replacing the previous models with different ones, we’ve completely and comprehensively re-imagined the entire vintage-reissue concept - restoring original tooling dies, voicing new pickups, reformulating vintage colors and more - based on actual vintage guitars we tracked down to make sure we had it right.  We did the work, and it shows, because there’s pure tonal magic in each new American Vintage instrument”.  The intention was to recreate new factory reissues much more similar to the originals by making the guitars according to the fabrication techniques of the past.  “We actually recreated the work process from way back, and these guitars turned out to be authentically unbelievable,” Richard McDonald declared.
This project was called “Pure Vintage”.  In order to make it possible, Mike Lewis and George Blanda visited various dealers and collectors in the USA to survey the golden age Fenders, as Dan Smith and John Page had done about thirty years earlier, when 1982 Vintages were introduced.  “This was a new level of inspection. We were working at a forensic autopsy level,” Mike joked.
The main changes made to the series consisted principally in the new flash coated finish, applied with a quick spray of nitrocellulose as to obtain a very thin layer, and the new pickups designed by Michael Frank Braun.  Also, the hardware was modified with the introduction of the eggshell knobs with slightly smaller numbers, the bone nut, the Pure Vintage Tremolo Assembly Bridge, whose saddles exhibited the “FENDER” and "PAT.PEND." engravings, and the Single Line Fender Deluxe Vintage Style tuning machines with the “FENDER” engraving on the back, very similar to that of the old Kluson Deluxe tuners.  Particular attention was also given to the shape of the body and the neck, which, differently from the old Vintage Stratocasters, had now rolled edges on the fretboard.  “I think the necks and their rolled edges might be the most unique things about these Pure Vintage guitars”.
The '56 Stratocaster, as is easily imaginable, was characterized by a large maple neck with a soft “V” profile, an eight-screw monolayer pickguard and an alder or ash (with white blonde finish) deep contoured body.  Unfortunately, the string tree remained butterfly-shaped.

American Vintage '56 Stratocaster: strangely the string tree remained butterfly-shaped
The '59 Stratocaster was presented in two versions, 1959 being a year of transition: they both had an alder body and a Slim “D” shaped neck, but the first one stood out for the one piece maple neck and a white eight- screw pickguard, and the second for its rosewood slab board fretboard and a three layer, ten-screw pickguard.

American Vintage '59 Stratocaster: a 3-ply and 10 holes pickguard stood out
The '65 Stratocaster was characterized by a much thicker neck with a “C” profile, a three layer and eleven-screw pickguard and pearl dots, but also by a Transition Logo, patent numbers and "ORIGINAL Contour Body Pat. Pend." decal.