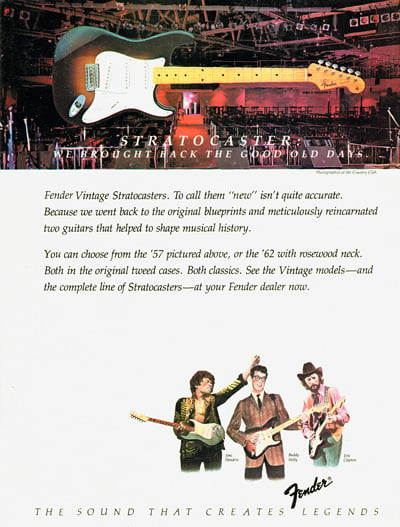 THE ORIGIN OF THE VINTAGE stratocasters

“We knew that the best thing for Fender to bring out to show people that we were back was to reissue what everybody loved, which is why we did the ‘57s and ‘62s and all that kind of stuff.  So we looked at a lot of vintage guitars”, Dan Smith said.  “I’ll never forget John and I going to DeKalb, Illinois, where we’d found that Larry Henrikson at Ax In Hand had about 200 Fenders in place.  So we went there, landed in Chicago in January, freezing cold, about 70 below.  Can’t remember how many hire cars we went through before we found one that worked.   Finally we get to Larry’s shop and spent a whole day there.  We were there on the mission to make sure we measured the stuff and got the data.  We wanted to get it as close as we could.  We took pickguards off, took pictures of pockets, tested paint, measured necks, all that kind of crap.  And we left having bought perfect examples of each era, too. I remember we spent $5,600 on three guitars, which for Fender at the time was ludicrous.  We went out and bought back our own product!”
John Carruthers, a famous luthier who customized and repaired instruments for some of the most acclaimed musicians, helped Dan Smith on the Vintage Reissues project, measuring many vintage Fenders, re-specing the reference standards, and helping to update ore replace at least some of the worn-out tooling.
However there was a problem regarding vintage style pickups because Fender didn't know anymore how to make them.  Obviously Abigail Ybarra could reproduce the way they were manufactured, but there was no technical data.  This is why Seymour Duncan entered the picture.  He was an old friend of Fender and was very helpful in sharing his knowledge and there’s a rumor that Fender reciprocated when Seymour asked if he could see Seth Lover's files and specs from when he worked at Fender.
The prototypes were built in 1981 and they were presented at the Anaheim NAMM in January 1982.  However, the reissues were distributed later, only at the end of the year, because the entire Fullerton factory had to be restructured and reorganized.
According to Fender, the Vintage Stratocasters were exact replicas of the originals, but actually they were very far from being similar: for example, the first reissues had the "Smith" headstock, slightly different from the pre-CBS one, in the ’62 there was neither the old celluloid pickguard, nor the clay dots and patent numbers, and also pickups, string trees and neck were different.  In any case, the reissues were excellent reproductions for the time: they both had staggered pole pickups, small headstock, vintage style hardware and nitro finish with polyester undercoat.   Moreover, the ’57 reissue had a single-layer pickguard and fretted maple neck, while the ’62 featured a 3-ply pickguard and maple neck with rosewood fretboard.
Looking at the distance of the 12th fret markers in the Vintage Reissue images in the 1982 catalog, it seems that these were faithful to the original pre-CBS guitars, while, actually, in the reissues this distance was not vintage-correct, because it would have cost too much to "redesign" the factory to maintain this detail.  It seems paradoxical that the reissues made by Fender Japan in the same period had the right distance between the two fret markers!  So what kind of guitars are those in the catalog?  Dan Smith, John Page, Freddie Tavares and Scott Zimmerman all had input into the production prototypes and the collected from stores vintage examples.  Dan Smith had been procuring and had some Japanese manufacturers samples branded Tokai amongst others.  When the catalogue was being designed, Fender’s UK consultant was contributing and gaining clearances and approvals for the Artist’s photos and the layouts they were in working with Joe Phelps Advertising Agency and Dan Smith.  Max Kay from EFR (Extremely Fucking Rare) Guitars was told by Tokai that the new Fender catalogue had photographs of Tokai guitars in.  This wasn’t completely true, because there was only a picture of the back of a Tokai Strat headstock showing the machine heads and this picture you can clearly see in the catalogue has "TOKAI" embossed into the metalwork of the gear covers.  When questioned about this bogus machine head by the European agents Dan Smith explained that was the only Tokai neck used and it was used just because it was around when the photographer was working but thankfully spotted during the approvals process of what has become regarded as probably the best and most coveted Fender catalogue ever printed.

Although it may seem a contradiction that two guitars inspired by the past helped the company that had most revived the electric guitar back into fashion, these two reissues were the proof that Fender was still able to make excellent instruments.  Improvement in production was due to a complete revision of the factories, which were no longer capable of supporting the huge amount of production, (from a numerical point of view), with a greater attention to quality.
The first Stratocasters of the Vintage series were made in Fullerton from the first half of 1982 until January 1985, when this factory closed.  It has been estimated that around sixteen thousand guitars of this type were built, known as "Fullerton Reissues", which are particularly desired by collectors, the reason why it’s so easy, unfortunately, to find fakes.  Production had been moved to the new Corona factory at the end of 1985, and in 1998 the series was renamed American Vintage Series​.​
Antonio Calvosa
​