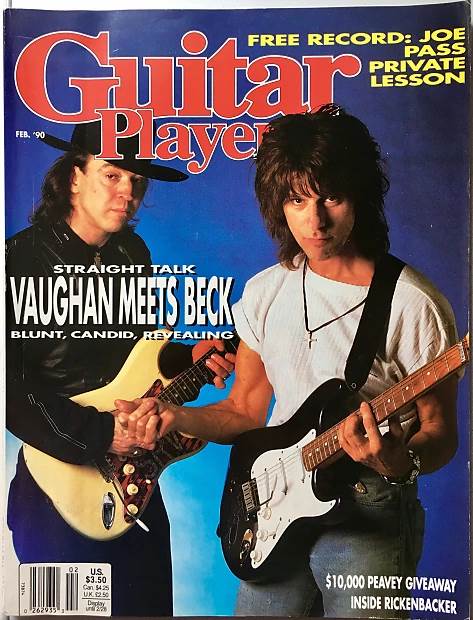 The Origin Of The Beck Model

This was the first occasion for Smith and Schultz to discuss the Signature Series with the guests.
A few months after the event, Jeff asked for a new Stratocaster with a large neck for his upcoming tour in Japan. ​
During the development of the signature one of the prototypes rejected by Jeff Beck, equipped with Wilkinson Roller Nut and with three stacked-coil pickups, evolved into the Strat Plus (on which the pickups would be the Lace Sensors).  ​And actually this guitar was used by Jeff to play the songs of his 1989 Guitar Shop performances, because it seemed the only one that could replicate all the harmonics on this album live.  Moreover its Wilkinson Roller Nut and its locking keys represented an excellent solution hold the tuning: “Feels like an early Stratocaster, but without the tuning problems,” Jeff stated, referring to the Strat Plus.
In October 1989, with the supervision of Dan Smith and John Page, J.W. Black built two prototypes: one blue finished like the Stratocaster on the Guitar Shop album cover, the other dark violet with the Brazilian rosewood fretboard and three Gold Lace Sensors, with which Jeff posed, together with Stevie Ray Vaughan, for the cover of the February 1990 edition of Guitar Player.
In that same period Fender gave Jeff a Stratocaster on which Pamelina Hovnatanian had painted the guitarist’s Ford that, unlike as sometimes reported, was not a signature prototype.
​

The Stratocaster that Fender gave Jeff on which Pamelina Hovnatanian had painted the guitarist’s Ford and that was not a signature prototype (special thanks to Pamelina)
Three more prototypes made by J.W. Black and dated January 1990 followed: another purple one, a green one, and another graphic guitar.  But the more attentive will remember that the Jeff Beck Stratocaster was already present on the Fender price list of January 1990, with the note "Final specification to be announced"!  Jeff, indeed, still wasn't convinced they should put his name on the headstock of the guitar: “He wanted to play a Fender, not a Jeff Beck Fender,” J.W. Black remembers.  But eventually the guitarist relented.
Finally the foundations of the agreement had been laid: the 1991 ​Jeff Beck Stratocaster (first series) ​was basically a Strat Plus with a very thick Special Deep '50s shaped neck and equipped with four Gold Lace Sensors, two of them, next to the bridge, adjoined to resemble a humbucker; a push-pull switch near the tone controls kicks in the second bridge unit, providing a "thicker sound".  The original Sperzel locking tuning machines were replaced, during 1994, by the Schaller ones and the LSR Roller Nut took the place of the Wilkinson Roller Nut in 1993.
Paradoxically, when the first Jeff Beck Stratocasters came out, the Graffiti Yellow finish was not taken into consideration, and it was available only in Midnight Purple, Surf Green and Vintage White.  And the first Strats Plus Graffiti Yellow, unlike what many believe, were not Jeff Beck prototypes!  It is also interesting to note that pau ferro was chosen for the fretboard.  However, almost immediately, Fender opted for rosewood, though many '90s Frontlines continued to report it as pau ferro.

In 2001 this signature was renewed by Fender.  The Jeff Beck Stratocaster (second series), available in the Olympic White and Surf Green finishes, featured three Ceramic Coil Dual Noiseless pickups instead of Lace Sensors, a thinner "C" in place of the large neck and a classic tone control instead of the TBX used in the first series.

Finally, in 2004, the Custom Shop unveiled the ​Jeff Beck Signature Stratocaster, available in Olympic White and Surf Green, which distinguished itself because the signature was not put on the front of the headstock, but on the back, and for the Sperzel Trim-Lok Staggered tuning machines.
​Antonio Calvosa