The birth of the John Mayer Signature Stratocaster 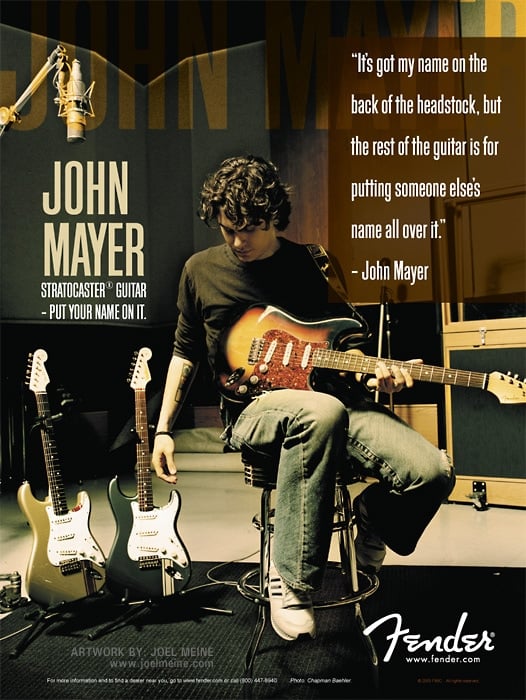 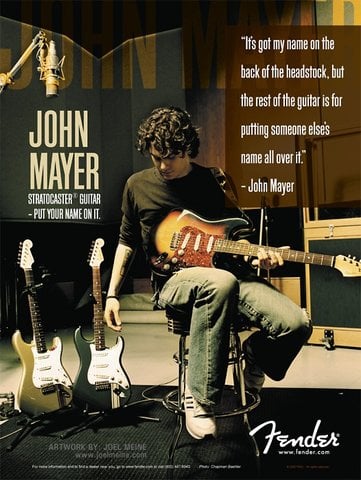 John Mayer advert
John Clayton Mayer was born on 16 October 1977 in Bridgeport, Connecticut.  He started playing guitar after watching the performance of Michael J. Fox, alias Marty McFly, in the movie "Back to the future".  His musical style was influenced, from the beginning, by Stevie Ray Vaughan.  It's no coincidence that he appeared in many live performances with a 1996 SRV Signature, widely used until 2003, and that he owns a Number One replica.
He modified his SRV Stratocaster many times during the years.  In 1997 he engraved his name on the neck plate, the following year he replaced the original pickguard with a tortoise shell one, and, after the breaking off the tremolo arm, changed the bridge.  Subsequently he removed some paint from the neck and applied, on the back of the headstock, a photo in which he and Matt Mangano, his roommate in college, appeared.  Moreover, he engraved his name also near the cavity of the tremolo, which he had fixed at the body with five springs.  This guitar was probably used for the recordings of Room For Squares.
In 2003 John was spotted at some concerts bringing another SRV signature, different from the first one, on which he replaced only the engraved pickguard with a 3-ply black one and that he played on his second album Heavier Things.
The idea of a signature Stratocaster that bore the name of this young and promising guitarist began to circulate in Fender corridors in the first years of the new millennium.
In June 2004 Fender master builder Chris Fleming made two prototypes of John Mayer Signature Stratocaster, which the guitarist played on his 2004 and 2005 tours and then gave to the luthier.  On the back of the headstock of the two guitars, under the guitarist’s signature, were the serial numbers "JM001" and "JM002", and, on the opposite side, always in the back of the headstock, there was the “Proto” decal above the Custom Shop master built logo with Chris Fleming’s signature.  The two guitars, inspired by Stevie Ray Vaughan’s Number One and by the Stratocasters of the first '60s with rosewood fretboard and small headstock with Spaghetti logo, were equipped with a tortoise shell pickguard and were the basis on which Fender shaped the  ​John Mayer Stratocaster, unveiled in 2005.
As easily imaginable, the John Mayer was based on the SRV signature, but featured some important differences: a less curved (9.5") African rosewood fretboard, a right handed vintage style bridge and a 4-ply tortoise shell pickguard on 3-Color Sunburst finish or a 3-ply mint green one on Olympic White finish. The neck had a thick “C” profile to get a “fatter” sound with greater sustain and on the headstock the string three was slightly more distant from the nut than that on the other "standard" Stratocasters.
The pickups were the Big Dipper, made according to the specs of John Mayer, which had never been offered for sale separately from the guitar.  The legend tells that John’s first SRV Stratocaster featured pickups with a winding defect: the result was a scooped sound in the middle which, analyzed on an EQ curve, recalled an upside down bell, hence the name "Big Dipper".  In addition to the 3-Color Sunburst and Olympic White finishes, the guitar was also made, for short periods and in limited editions, in the Charcoal Frost Metallic (2005) and Shoreline Gold (2007) finishes, both with "competition stripes".  There were also the special versions: the 2007 Cypress Mica and the 2010 Special Edition Black1, an economy version of the limited edition Custom Shop model that would be unveiled that year, black with gold hardware and Gold Schaller Die-Cast tuning machines with white pearloid keys.
In addition to the SRV, John played other Stratocasters, among them the Custom Shop (personal) versions of the Inca Silver with the Competition red stripe (which you can see in the Bigger Than My Body video) and of the Charcoal Frost Metallic "striped".
​But, certainly, the Stratocaster usually associated with John Mayer was his Black One, a Custom Shop instrument made by John Cruz whose construction was also attended by the guitarist, always interested in lutherie, and yet based on the SRV signature.
The Black One had the Gold Schaller Die-Cast tuning machines with white pearloid keys, the same used on Stevie Ray Vaughan’s Number One by his technician René Martinez, who by now was also John’s.
The first thing about Black One that stood out was its heavy relic appearance, strongly desired by the guitarist, according to whom too much paint “choked” the sound.
John Cruz, in an interview with L.A Music, declared that the Black One pickups were not the Big Dipper that would have been used later on John Mayer signature, but custom wound single coils built to imitate the sound of Stevie Ray Vaughan’s Number One.
Other features were the gold vintage style bridge and a stock wiring. The neck, definitely worn, was replaced in 2014 with an identical one by John Cruz.
In 2010 John Cruz made 83 John Mayer Limited Edition Black1, obviously yet without Big Dipper; at the same time, in the same year, 500 economic versions were made, the ​Special Edition Black1 Stratocaster, that, as already mentioned, were basically John Mayer signatures (thus with Big Dipper), black, with golden hardware and Gold Schaller Die-Cast tuning machines with white pearloid keys.
Antonio Calvosa