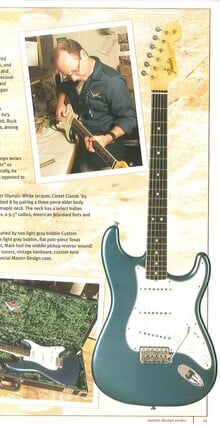 The Master Design Stratocasters were guitars unveiled for the first time in 2004 and built in accordance with the specs of a Master Builder.  Made in extremely limited editions, they could be inspired by a Stratocaster of the past or could be hot-rodded guitars or simply exhibition models.  At least ten instruments were usually made by the same luthier that had conceived them.
The idea of the Master Designs came to Richard McDonald, who asked every guitarist he went to: “There's a guitar in your life, some Fender in your collection, or one that you had, or one that you always wanted to make that's special, just for you.  Go ahead and make it, in a very limited number of master builts.”
The Builder Selects, instead, were guitars similar to the Master Design ones, but they differed in that the instrument wasn’t designed by a Master Builder, but requested from the Master Builder by a dealer, by an artist, by Fender marketing sector or by the customer.
The first models of these series are described below.

In 2006 it was the turn of the ​Greg Fessler Sparkle Stratocaster, made in one hundred master built and one hundred team built units.  “I happened to be looking through the "Galaxy of Strats" book and I saw this sparkle '64.  I thought it was a neat, flashy guitar, so I went with that and it turned out very well,” Greg remembers.  “I wanted my instrument to feel like an old friend, yet look like something with a bit more flash.”
As the name suggests, the finish of the guitar was Gold Sparkle and was furrowed by visible cracks that lightened the visual impact.  Greg considered his Stratocaster a vintage/modern hybrid, characterized by three types of pickups: Texas Special at the bridge, Fat ’50s reverse-wound, reverse polarity at the middle, and ’69 Strat at the neck.  It featured a rosewood round lam fretboard with frets and radius typical of the American Standard and a heavy relic hardware. 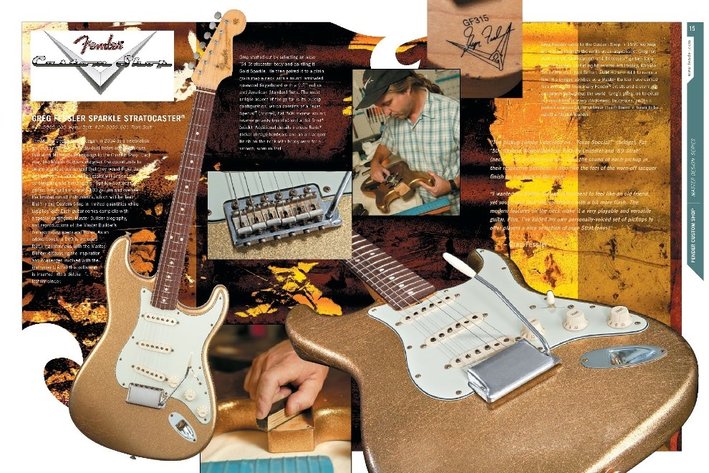