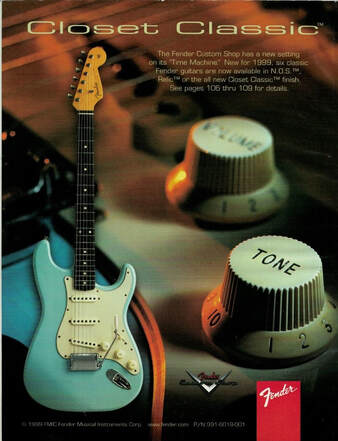 Advert of the new Closet Classic finish of the Time Machine Series, Fender Frontline
It was already clear with the introduction of the Vintage reissues and the Cunetto’s Relics that the halo of magic which enveloped old guitars, including those that exhibited important signs of aging, was increasingly pronounced seducing more and more guitarists.  For some of them buying an instrument with a worn appearance was simply a practical matter (they didn’t have to worry about “mistreating” it too much), but others were really fascinated by these guitars.  A “sweet illusion”, maybe.  But the feeling of having at hand a not too expensive guitar with many years and concerts behind it, or which flaunted the main features of those of Fender golden age, attracted an increasing number of musicians.  In any case, the "relic" phenomenon has always aroused strongly conflicting opinions, but it also allowed the Corona company to double its work, and the Time Machine Series, introduced by the Custom Shop in 1999, is currently one of the major source of income for Fender, according to Mike Lewis.
This series represented a milestone in the history of the Stratocaster, not only because the California company used, where possible, the same production techniques and the same materials of the reference years, but also because it drove the Custom Shop luthiers to study, in the smallest detail, guitars from the '50s, '60s and '70s.  They analyzed bodies contours, necks shapes, headstocks, pickups, hardware, their evolution during the years, and also things that could be less evident, like routing and wiring, in order to reproduce the instruments as well as possible.  A general improvement in the factory production consequently followed.  For example, it is not a coincidence that with the introduction of the Time Machines, the headstock shapes on the American Vintage reissues or on the American Standard Stratocasters began to imitate those of the guitars of Leo Fender era.
Between 1995 and 1997 the Relic '50s Stratocaster and the Relic '60s Stratocaster were the only Stratocasters with a worn appearance; in 1998 they were joined by the NOS Stratocaster (Custom Classic Series), a guitar that, according to the catalog, sported the main features of the Stratocasters from the mid-1960s.  Until this moment, then, no aged instrument copied to perfection a guitar made in a particular year. Mike Lewis, Fender marketing director since 1995, began to work on the idea of a new series of relic instruments at first with John Page, then with his substitute at the head of the Custom Shop, Mike Eldred, expanding the concept in the new Time Machine Series, whose guitars would recall meticulously the old glories of the past, by imitating the originals in the smallest details. 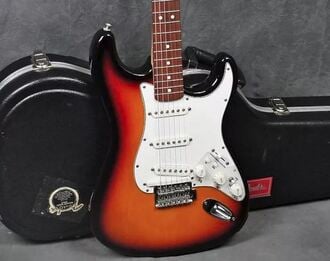 Three grades of aging would have been available, on the base of the finish wear level: N.O.S. (New Old Stock), Closet Classic (only slightly aged), and Relic (on which the signs of aging were evident).
The N.O.S. were new guitars, “like just taken from the warehouse, never played and without signs of wear or aging”, Fender catalog recited.  The difference from the modern instruments was that they were painted according to the old methods.  However, the finish was more “flexible” compared to that of the Relics and tended to age less quickly.
The Closet Classics were a middle, as if these guitars had been used for some time, eventually played a little bit every month and then stored in the closet.  The catalog described them as “slightly ruined, yellowed over time, whose finish exhibited a slight checking and some small splits, typical of the guitars that have been exposed over time to different temperature conditions and to humidity”.  Moreover, also the plastics were vaguely yellowed and the hardware was oxidized.
Finally the Relics: guitars described as “used and abused”: evident checking, scratches, whole pieces of paint skipped, definitely yellowed plastics and, sometimes, even a little rust.  Maybe, too much “used and abused.”
1999 was a year of decisive importance for the Custom Shop.  In fact, with the official debut in January of the Closet Classic guitars, which joined those still called Relic Series and N.O.S. Strat, a further step forward was made.  Now all the Custom Shop reissues, whether they were N.O.S., Closet Classic or Relic, referred to a specific year.  The new instruments, which only since the summer of the same year have been reunited in the Time Machine Series, included, besides the ​'56 Stratocaster, '60 Stratocaster, and '69 Stratocaster, also the '51 Nocaster, '63 Telecaster and Relic '64 Jazz Bass, and they were all available in all three levels of aging, Relic '64 Jazz Bass included, despite its name.
​
At the base of everything was an accurate analysis by the luthiers of the Custom Shop of the original instruments from which the Time Machines took their cue, with the awareness that year by year the construction methods, the paints and the ways they were applied could vary considerably, and these were all factors that had to be considered to make replicas credible.  For example, the ’60 had a smaller truss rod, just like that which Leo inserted in the original Stratocasters of 1960.  The ’69 Stratocaster could be ordered both with the rosewood fretboard and the maple one, while, with a small surcharge, the '56 Stratocaster and the '60 Stratocaster were available with a golden hardware.
In 2003 at this series were added the '65 Stratocaster, with a rosewood round-lam fretboard (already available out of catalog since 2002), a '59 Esquire and a 1960 Tele Custom; the following year was the turn of the ​'66 Stratocaster, which, however, entered the catalog in 2005.  Over time, many others became parts of the series.
But, as the “normal” Relic aging didn’t seem enough yet to satisfy all the guitarists (just think of the extreme conditions of Stevie Ray Vaughan’s Number One or the even more exaggerated Rory Gallagher’s Stratocaster), Fender thought to introduce an extreme aging level, called Ultimate Relic or Heavy Relic, appeared for the first times on some master built instruments made by John Cruz and described with the "been to hell and back" phrase.
Finally, the Journeyman Relic and the Lush Closet Classic guitars were introduced.  The former were a middle between the Relics and the Closet Classics, defined “used but not abused”.  The Custom Shop describes them as widely used guitars, but above all at home, with few concerts on their shoulders, well maintained over the years, whose finish shows a good level of checking and only a few small scratches and with a hardware dulled by time. Instead the Lush Closet Classics are, according to Fender, guitars “Owned with pride.  Well taken care of and religiously polished throughout the years.  The owner of this guitar took pride in keeping it clean and shiny”.  A very light relic finish, typical of the instruments which belong to those guitarists who, over the years, take great care of their guitars, and so characterized only by checking and moderate oxidation.
Antonio Calvosa