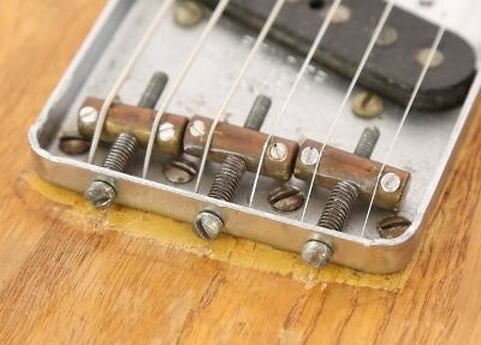 THE DEVELOPMENT OF THE FENDER TELECASTER - PART #2

At the end of 1952 Leo Fender changed the Telecaster’s electronics, replacing the blend with a tone control. So now, the first switch position activated the bridge pickup connected with the tone control, the central switch position the neck pickup with the tone control and the third switch position the neck pickup with the capacitor that further cut treble, producing the “deep rhythm” effect Leo liked.  It was only accidentally that guitarists discovered, thanks to this wiring, that if the selector was left hanging between the first two switch positions the two pickups could be combined to give unexpected sounds.
Another important change concerned the neck: the first Esquire/Broadcaster/Nocaster/Telecaster guitars all had a bulky neck with a very prominent “V” profile, also called “boat neck”, which made it easy to press the thumb on the low E string, but at the beginning of 1951 the neck’s profile became much more rounded.  Many ascribe this change to the advice Leo was given by violin teachers, who believed the new profile would have allowed to better exploit a technical approach to the more classical instrument.  In 1953 larger and thicker “baseball bat” necks started to appear.  In the course of 1956 soft “V” shaped necks, which were less prominent than those of the 1950, appeared, and gradually replaced the more rounded ones, but later in 1957 they went back to being very pronounced.  Early 1958 necks were flatter and rounded, though they still had a slight “V” feel.  However, in late 1958 a much flatter profile was adopted.
The pickguard, which had been black until the summer of 1954, became white just in time for the summer NAMM (even though Don Randall continued to show a black one on 1950s advertising flyers because he believed it was more photogenic) and the “butterscotch” finish became slightly lighter to bring out the ash grain.
With the advent of rock'n'roll, the demand for alternative colors to the standard finish increased, prompting Fender to include, in the 1956 catalogue, the possibility of having a Custom Color Telecaster for a 5% surcharge.
In the summer of 1958, Fender introduced the Jazzmaster, its first guitar with a rosewood fretboard glued to the maple neck.  As Freddie Tavares recalled, the request came directly from Fender Sales: “Our distributors, which were a different entity, would come up from time to time with suggestions because they had their ideas and thought on marketing.  They wanted a rosewood fingerboard.  They said ‘everybody else has one, why can't we have one?’”
The poles of the first lead pickups were “flat”; however, some Telecaster guitars came out of the factory with an unbalanced sound and with the low E too strong, owing to a still somewhat inconsistent production.  Leo fixed this, from mid-1955, by staggering the height of the magnetic poles.  This said, although the sound was now more balanced, it was also sharper.
The bridge saddles of the very first models were made of stainless steel, but these were replaced by brass ones between the end of 1950 and the end of 1954.  At the end of 1958 Fender started using threaded bridge saddles, with a lower mass, and for a little over a year the strings were no longer run through the body, but blocked directly on the plate.  This, together with the staggered pickup poles, made the sound of the late 1950s Telecaster guitar the sharpest of the entire pre-CBS period.
In the summer of 1959, following the positive reactions to the new Jazzmaster, the Telecaster also adopted the rosewood fingerboard, probably due to some complaints about the worn look that the lacquered maple fingerboard assumed after heavy use.  Because the truss rod of the new Telecasters was inserted into a channel in the neck that was covered by the fingerboard, the guitars were devoid of walnut plug and skunk stripe.
However, some Telecasters with a laminated maple fingerboard (maple-cap) were still made, at the request of some musicians in the early 1960s, and were once again put in the catalogue in 1967, with a 5% surcharge.  At the beginning of 1969 the maple-cap necks began to be gradually replaced by the 1-piece maple ones, always available on request, consequently the truss rod insertion method was changed again and the skunk stripe and the walnut plug came back again.  Obviously, to optimize production, the truss rod would also be inserted from the back into the necks with a rosewood fretboard, which explains why these necks also had skunk stripe and walnut plug.

A 1959/1960 Telecaster with the new Brazilian rosewood fretboard, Courtesy of Cesco's Corner
After the acquisition of Fender Musical Instruments and Fender Sales by CBS (Columbia Broadcasting System) on January 5, 1965, other changes were gradually made to the Telecaster.
As for the Stratocasters the emblem of this change was the transition to the large headstock in December 1965, for the Telecaster the turning point was 1967, when the wiring of the ‘50s was replaced by a new circuit that allowed the combination of two pickups, the Fender Keys took the place of the Klusons and the Black Logo (often also called CBS Logo or TV Logo) replaced the Spaghetti Logo on the headstock of the standard Telecasters.  Gradually Fender / CBS began experimenting with new thick-skin high-gloss polyester finishes, more suited for mass production as an alternative to the more fragile and expensive nitrocellulose finishes.
The single-pickup Esquire went out of production in late 1969 because players now preferred the Telecaster and the Esquire was selling poorly.
​

In 1968 Fender introduced two additional finishes in an effort to jump on the flower-power bandwagon, the Paisley Red and the Blue Flower: “Paisley Red pulsates with every beat and swirls in a blinding carousel of colors forms and tones” and “Blue Flower bursts forth in a dazzling array of subtle purple and green patterns”.  Paisley is a kind of drawing obtained using boteh or buta, a drop-shaped plant motif, of Persian origin, back in fashion in the '60s due to its similitude to the psychedelic patterns typical of LSD.  Both finishes were achieved in a very simple way: Persian drops or flowers were printed on a thin high-quality paper foil glued on the body’s top and back and on the pickguard.  A pink finish for the Paisley - blue for the Blue Flower - was sprayed on the sides to produce the burst effect.  Then the body was protected with a clear coat finish. The Paisley Telecaster became famous because it was frequently played by James Burton.