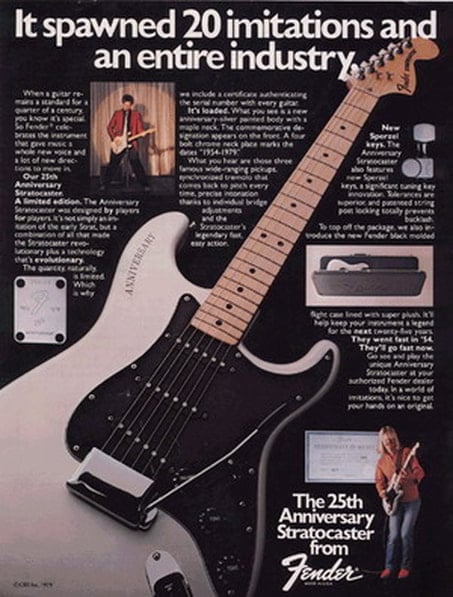 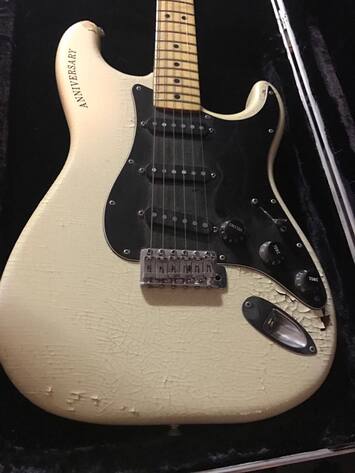 The very first 25th Anniversary Stratocasters had a fragile water based pearl finish (Courtesy of Massimo Salmoiraghi)
As a result of the decline in quality during the CBS era, the interest of musicians in Fender guitars had diminished, and, probably, if it wasn't for Jimi Hendrix, who at the end of the '60s revolutionized the way of playing with his Stratocaster, many guitarists wouldn't have chosen a Fender at all.  But also other musicians, in the CBS years, raised Stratocaster’s name: David Gilmour, Jeff Beck, Ron Wood, Steve Lukather, Frank Zappa, Mark Knopfler, Ritchie Blackmore, Rory Gallagher and Eric Clapton. However, these guitarists used, predominantly, pre-CBS Stratocasters, and not the new ones.  This fact made it clear to CBS that something was going wrong and that it was necessary to find a solution.  Indeed, it seemed that the most dangerous competitor of the Stratocaster was precisely the “vintage” Stratocaster.
So in June 1979, to celebrate the twenty-fifth anniversary of its leading guitar, Fender released the ​​25th Anniversary Stratocaster, of which about ten thousand copies were produced.  This guitar reintro the 4-bolt neck plate without tilt neck and the truss rod adjustment returned to the neck heel.  The new guitar was equipped with a fretted maple neck and with Deluxe Sperzel non-locking tuners.  Later many models were equipped with the Deluxe Schaller Keys.  The first 25th Anniversary Stratocasters had a water-based pearl finish that deteriorated immediately and that was therefore soon replaced with a new silver finish.  On the upper horn there was the black writing "ANNIVERSARY".  Its neck plate showed the six-digit serial number that began with "25" and the "1954 1979 - 25th ANNIVERSARY" engraving.  This guitar was not of the same quality of the pre-CBS Stratocasters, but it represented, at least, CBS' attempt to improve its products.  And in fact, shortly thereafter, the 3-bolt neck plate would no longer be seen even on the Standard Stratocaster.
Antonio Calvosa
​