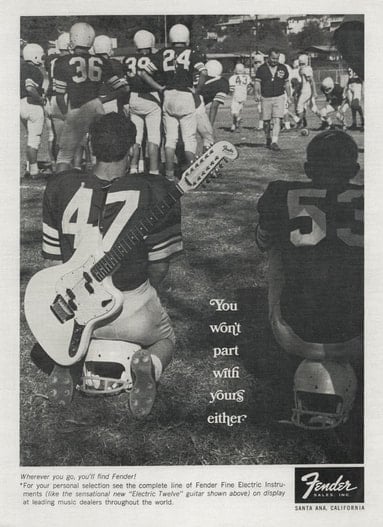 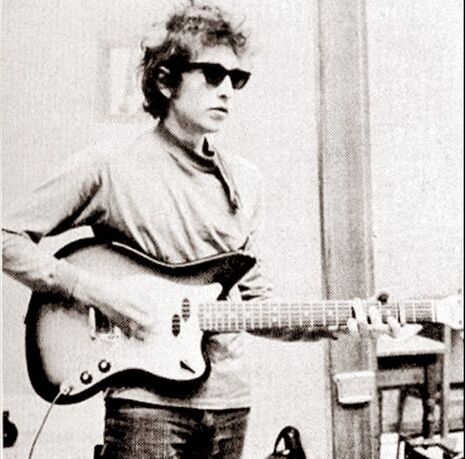 Bob Dylan and his Electric XII, 1965 sessions for Highway 61 Revisited
Simple but stylish and efficient, the Electric XII was one of Leo Fender’s last designs before his company was sold to CBS in 1965.  Although Leo arrived a little late to the 12-string electric guitars, compared to other guitar manufacturers, he designed an entirely new guitar rather than merely sticking six more strings on an established model, which is basically what several other brands did.  Therefore, the first Fender 12-string electric guitar was not a Stratocaster model.
The Electric XII was introduced in June 1965, soon to be followed by the semi-acoustic Fender Coronado XII.  It was used by Jimmy Page on Stairway to Heaven, by Pete Townshend on Tommy and by Eric Clapton on Dance the Night Away.  It appeared on the 1965 sessions for Highway 61 Revisited of Bob Dylan, although it’s unclear if he recorded anything with it, and it was used during the Blonde on Blonde sessions.  This guitar went to auction in 2021 and was sold on April 24, 2021 for $294.297,70
The guitar featured a comfortable offset body, an enormous “hockey stick” headstock, amplifier style knobs, split single-coil pickups, four-way rotary pickup selector which allowed to choose between each pickup by itself, both pickups together and both pickups together but out of phase with each other. The majority had dot neck position inlays and no binding, but some necks were bound, with blocks.  This was not mentioned as an option in price lists, and whether there is a correlation to neck width is unclear.
The real innovation of the Electric XII, however, was its bridge.  Most electric 12-string guitars used six-saddle bridges accommodating two strings apiece, which could be problematic for intonation.  The Electric XII, on the other hand, featured a fully adjustable 12-saddle bridge that allowed precise intonation for each string, with a string-through-body design that offered increased sustain.

In Fender’s modern era, there have been several 12-string Stratocaster models, all made in Japan.
The first, called ST-XII, in production between 1987 and 1993, was intended for Japanese domestic market only and could be recognized by the slightly lop-sided headstock with a whitish CBS style logo, alder body and 22 frets.  It featured the same bridge section of the '60s Electric XII.  It was designed in the USA, its headstock was devised by Dan Smith, but its production was shifted to Japan due to capacity constraints.
The second one was called Stratocaster XII, and appeared on US and European Fender catalogs between 1988 and 1991. It differed from the domestic 12-string strat because it featured a basswood body and a flatter fretboard.
Another export model was realized in Japan between 1994 and 1996, the Strat-XII.  It featured an alder body like the ST-XII, but it also had a flatter fretboard.
The domestic ST12-90TX and ST12-98TX and the export Stratocaster 12-String featured 21 frets and the new GTC-12 Bridge with elongated saddles.  It was a fully adjustable hard-tail bridge that made tuning quick and easy.  They both had the characteristic slightly lop-sided headstock, but, unlike previous models, had the Spaghetti logo.  They were available in Sunburst finish and in Lake Placid Blue and Burgundy Mist Metallic with matching headstock.
Between 2018 and 2019 the Made in Japan Traditional Stratocaster XII was produced for both domestic and export markets.  It featured a basswood body, 21 frets, 7.5" radius fretboard and a new 12-string hard-tail bridge.
Antonio Calvosa