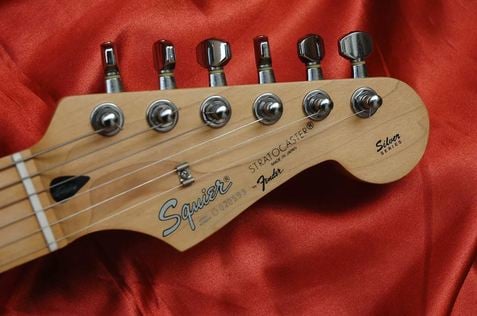 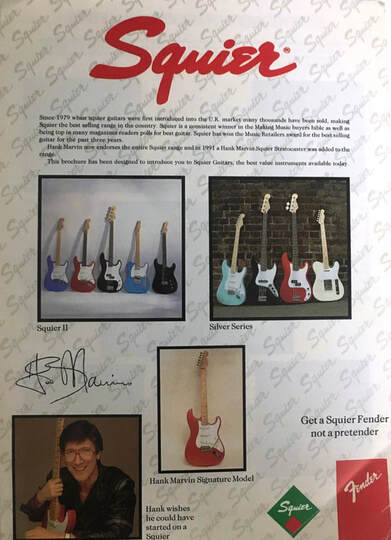 1991 UK catalog with Silver Series, Squier II and the new Hank Marvin Strat
Although in 1987 the Squier brand was moved to Korea, it was still possible to find some Squier guitars made in Japan.  However, no Squier had been manufactured in Japan since 1989, so, if a guitarist wanted a Squier, it had to be Korean.  Yet, the new Korean Squiers are remembered as very low quality guitars, both for the hardware and the inferior electronics, and also because the body of many Squiers made in Korea was plywood!  Consequently, sales collapsed.
For exactly this reason, Fender decided to bring back the production of Squiers in Japan, with the ​Squier Silver Series Stratocaster, officially made since 1990 and recognizable thanks to the Silverish Squier Logo and to the "Silver SERIES" decal on the ball of the headstock, and the 1991 ​Hank Marvin Stratocaster.
Despite rumors and blogs claiming that Silver Series was introduced in 1992, a small run of Squier Silver Series Stratocasters was already made in 1988 and 1989 and probably intended for Japanese market only.  However the production stopped for while, probably because Fujigen factory had departments revamp and its production slows massively between 1989 and early 1990.  This Series was resumed definitively in 1990 and new guitars were manufactured with new CNC machines and new stuff.  It's also interesting to note that few Silver Series Stratocasters were Fender branded.
The first Squier Silver Series Stratocasters were exported to Great Britain in 1990, besides being sold in Japan with the name SST-33, and remained in production until 1996.  They were identical to the Hank Marvin model, but were available also with rosewood fretboard, in more colors and with a cheap "P.A.F." wood fiber body (although 1992 Twang catalog reported basswood).
The tuning machines were, at first, good quality Gotoh cast/sealed (later replaced by cheaper covered tuning machines), the vintage style bridge had unstamped saddles and die-cast block, and the electronics were very cheap.  Access to the truss rod was an important difference between the MIJ export Squier Stratocasters of the early '80s and these new Japanese Silver Series: it was on the headstock for the Silver Series instead of at the neck heel like the old Squiers.
However few units were devoid of the “Silver Series” decal and were equipped with leftover Squier Standard Strat parts, as 8-hole pickguards and covered tuners.
Since 1992 other Squier Silver Series Stratocaster models were sold in Japan only, the SST-36, the same of SST-33 but available in Gun Metal Blue and Gun Metal Red, and SST-39, recognizable for its foto flame finishes. 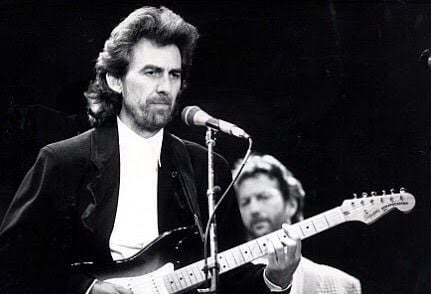 George Harrison with the JV Strat he gave to his son Dhani, Price's Trust Rock Gala, June 5, 1987
The Silver Series holds a very unique record: indeed, one of these guitars was the most expensive “used” Squier ever - in 2003 the Silver Series that belonged to George Harrison and Spike Milligan was auctioned for $29,384!
George Harrison had already used a Squier on stage.  In fact he played the export "JV" Stratocaster he bought for his son Dhani at the Prince's Trust Rock Gala at London's Wembley Arena, on June 5, 1987.  On this occasion, he performed While My Guitar Gently Weeps with Ringo Starr and Eric Clapton.  This didn't go unnoticed by Jamie Crompton, Fender Artist Relations Manager for England and Europe, who decided to give George a new Squier model to promote this brand.  According to Jamie the Silver Series Stratocaster in original tweed case was delivered to George Harrison, who then personalized the instrument with a 2-point tremolo instead of a vintage style one and a mint green pickguard.  The serial number L036415 indicated probably a 1991 model.
Later, George gave this Squier to his friend Spike Milligan, one of Britain's leading comedians after gaining popularity on the radio show "The Goon Show" in the '50s and then on TV, who, in turn, later gave the guitar to the session guitarist Troy Tempest.

Between 1992 and 1995, intermittently, some ​Fender Squier Series Stratocaster had been made; they were Fender branded, similar to the Korean Stratocasters, distinguishable by the "Squier SERIES" decal on the ball of the headstock, the covered tuning machines and the ceramic pickups.
Some of them had the Spaghetti Logo, others the Black Label Logo.  The first ones, intended for export market only, had a basswood body with a three-layer pickguard and the serial number, with the “MADE IN JAPAN” decal on the neck heel.  The second had a poplar body with 1-ply pickguard, “MADE IN JAPAN” decal on the front and serial number on the back of the headstock; they were intended for both the export market and for the Japanese domestic market with the name ST-30.
Obviously, they should not be confused with the JV’s, and neither with the Mexican Squier Series Standard Stratocaster (1993-1996) nor the Korean Squier Series Stratocaster (1992-1993). They were low-budget Stratocasters, priced between the Korean Squiers and the Fender branded made in Japan guitars.

Wayne's World was a 1992 comedy film for a young audience, with the participation of the novice Mike Myers and Alice Cooper.  In one of the scenes one of the protagonists was seen playing a Fender Stratocaster.
Given the success of the film, Fender decided to realize, between the end of 1992 and 1993, in the FujiGen Gakki factory, the ​Wayne’s World Stratocaster.  Essentially, it was a Squier Silver Series but with a basswood body instead of alder, covered unslotted tuning machines in place of the Gotoh ones of the Silver Series, a neck plate on which the Wayne’s World logo was engraved, and was available only in the Arctic White finish.
We should not forget ​Wayne’s World 2 Stratocaster, manufactured in Mexico at the Ensenada plant only in 1994.
Antonio Calvosa