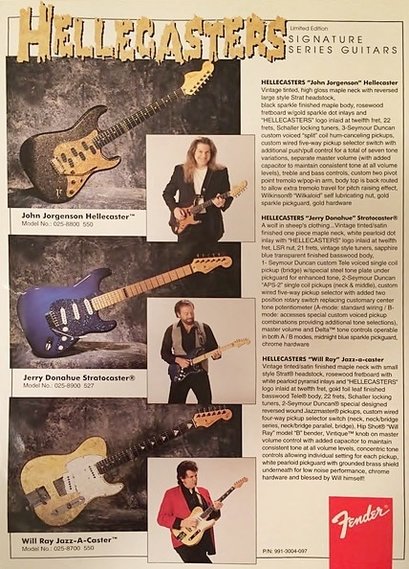 The Ventures signature ad (1996)
The Ventures was an instrumental band, famous in the '50s and the '60s, that made extensive use of Fender guitars and basses.  In its golden period the band was composed of rhythmic guitarist Don Wilson, bassist and guitarist Bob Bogle, guitarist Nokie Edwards, who alternated over time with Gerry McGee, and drummer Mel Taylor.
Despite the fact that the band also used Mosrite’s instruments (the company produced a line with its name), in 1996 Fender decided to celebrate his 50th anniversary making, only for one year and in limited edition, a series of ​​Ventures Stratocaster, Jazzmaster and Jazz Bass. These instruments featured an ash body with a transparent Midnight Black finish, through which it was possible to glimpse the wood grain and that turned to matte black at the edges.
The Ventures Stratocaster was characterized by a small matching headstock with The Ventures Logo, a bound rosewood fretboard, pearloid block markers, shell pickguard and gold hardware.
Each of the band members asked for changes to the original Fender design: Gerry, in particular, inspired by Eric Clapton, had three Gold Lace Sensor pickups and the MDX boost instead of the second tone knob.
Fender Japan decided to continue the production of the Ventures Stratocaster until 1999, but only for the Japanese market; the “domestic” model was distinguishable by the presence of the band’s logo also on the body.

1997 Hellecaster Ad
In 1997 Fender launched a line of guitars with specs never seen before dedicated to the super-band Hellcasters, a trio of guitarists playing licks, riffs and solos based on their three harmonized guitars, Will Ray (a session player from Virginia), John Jorgenson (former guitarist of The Desert Rose Band and Elton John) and Jerry Donahue (of the Fairport Convention).
The John Jorgenson Hellecaster was immediately noticeable for the very special design of the Seymour Duncan split single coils. Each pickup was divided into two, hum-free but very far from the classic Stratocaster sound. A push pull switch on the second tone control enabled either the pickup at the bridge or at the neck to be activated together or the neck/central combination, for a total of seven sounds; the central knob was not treble cut but bass cut. A heavy maple body (unbelievable!), gold hardware, reverse big headstock with Schaller locking tuners, brass Schaller floating bridge and a Black Sparkle finish were the other characteristics of this guitar.
The Jerry Donahue Stratocaster, with the Sapphire Blue finish and "Dark Blue with Sparkle Elements" pickguard, had a "V" shaped neck and was equipped with a completely innovative electronics. The pickup at the bridge, a Seymour Duncan Custom Tele Voiced Single Coil, very similar to the Seymour Duncan Twangbucker, was overwound and had a steel plate which enabled a tone with richer mids and greater sustain and attack.  The other two were Seymour Duncan APS-2 Single Coils in Alnico II.
In addition to the classic master volume, it had only one tone knob for all the pickups; the central knob, actually, was a 2-way rotary switch, that, combined with the five-way selector, allowed switching from the five classic Stratocaster sounds to three others: one in which the pickup at the bridge and that at the neck worked together in parallel, and two in which these pickups were combined with an alternative circuit, consisting of a resistor and another capacitor, in order to get a sound defined "out-of-phase" or "in-between". Will Ray instead had two models built by Fender, his signature Jazz-A-Caster and the Mojo-Tele.
They were all made in limited edition; in fact, about 200 Jazz-A-Casters and 400 John Jorgenson Hellecasters and Jerry Donahue Stratocasters have been produced.

OTHER EXPORT SIGNATURE STRATS MADE IN jAPAN

Many other signatures were made in Japan for export market: two Stratocasters dedicated to Hank Marvin, the first one Fender branded, the second Squier, the Iron Maiden and the Matthias Jabs, distinguishable for the planet-shaped markers and for the presence of two volume knobs and a single tone knob.
Two limited editions were also made, the endearing Richie Sambora Paisley Stratocaster and the Ritchie Blackmore, and the Yngwie Malmsteen Standard Stratocaster.
There were also versions of these instruments intended for Japanese territory only, with slightly different specs.
Antonio Calvosa