It is said that the first 1991 ​Standard Stratocasters, which replaced the eponymous guitars made in Japan, featured bodies and necks realized in the Corona factory.  This is only partially true.  In fact, according to what declared by John Page, bodies and necks were sent by the US in a raw state to be smoothed and polyester finished in Mexico.  Moreover, since the beginning, they were not part of the same lots intended for the American Standard Stratocasters, but were put aside to be sent to Ensenada.
One of the first problems of the MIM Standard Stratocasters was that the neck did not always fit perfectly into the neck pocket of the body, thus sometimes resulting in space between the neck and the body with a consequent loss of stability.
The pickups were ceramic and had two thin magnetic bars, differently from the previous Japanese Standard Strats or Korean Stratocasters whose pickups had only one.  The tuning machines, the bridge (tighter than that of the American Standard with a 52 mm mounting and string spacing), and the saddles, which exhibited the double “FENDER”, were from Ping (Taiwan) under Fender license.  Access to the truss rod was in the headstock area, but differently from American Standard BiFlex, was adjustable in only one direction and had a black plastic, not wood, insert.
In 2002 the body, until now poplar, was replaced by an alder one and, in 2006, the tremolo block was reinforced, body cavities shielded and the vintage style frets replaced by medium jumbo ones.  The guitar was by now very different from its debut, and at the end of 2008 all these variations were formalized with the introduction of the new ​Standard Stratocaster (Upgrade), distinguishable by a Black CBS Logo (while the previous ones had a Modern Logo, always in CBS style, but whitish).
It's interesting to note that the very first Standard Strats were a little bit inconsistent and seem to be built with random components.  So it was possible to find some models with a CBS style gold logo, 22 frets, vintage style truss rod, Eastern Synchronous Tremolo bridge with block saddles or different pickguard.  In fact, when the production of Standard Stratocasters started in 1990, there were chronic parts shortages while ramping up production in Ensenada factory. So, Fender got parts from wherever they could to build guitars, even from non-Fender suppliers.
​A little at a time also other guitars belonging to the Standard Series were presented, including the Standard Fat Strat (or Standard Strat HSS) and the Floyd Rose Standard Stratocaster (modified several times over the years), the ​Standard Stratocaster Plus Top (and derived), the Roland Ready or the Stratocaster Junior.
​ 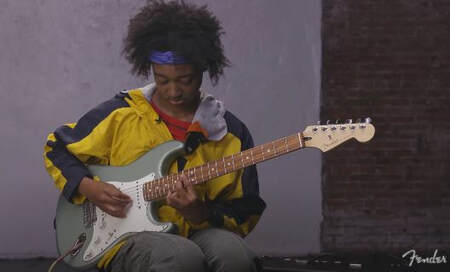 Melanie Faye and the Player Plus Stratocaster
In mid 2017, because of the new restrictions imposed by the CITES, Fender replaced rosewood with pau ferro on the Standard and other Mexican series.  In 2018 this change was formalized with the introduction of the Player Series, which took the place of all Standard Series guitars.
“The inspiring sound of a Stratocaster is one of the foundations of Fender.  Featuring this classic sound - bell-like high end, punchy mids and robust low end, combined with crystal-clear articulation - the Player Stratocaster is packed with authentic Fender feel and style.  It’s ready to serve your musical vision, it’s versatile enough to handle any style of music and it’s the perfect platform for creating your own sound,” as Fender stated in the catalog.
The main differences between the old Standard and the Player Stratocaster, otherwise identical, consisted in the Alnico pickups of the new guitar made in Mexico, the twenty-two frets and the 2-pivot bridge with vintage style saddles.

The Player Plus Series 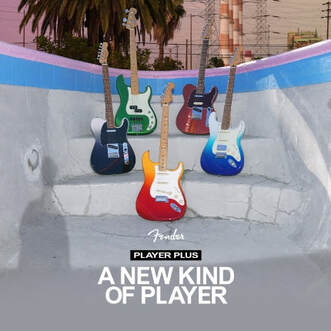 Although there were some rumors about its release back in July 2021, the Player Plus Series was unveiled officially in mid-September.
It was an evolution in its best-selling Player Series, which had sold over 400,000 instruments since its launch in 2018, and replaced Fender's Deluxe Series.  With upgraded specs and new finishes optimized for modern players, these instruments represented a substantial but still accessible upgrade on the Player Series.
“When we first launched the Player Series in 2018, we set a new standard for what an entry-point Fender could be,” said EVP Fender Products Justin Norvell.  “The Player Plus series offers a next-level playing experience to help a new generation share their passion and distinct perspective.”
Conceived to provide improved playability and comfort to both seasoned players and aspiring guitarists alike, the Player Plus Stratocaster featured newly voiced Noiseless pickups, locking tuners, a 2-point tremolo system, 22 medium jumbo frets, 12” radius fretboard and rolled fingerboard edges for a broken-in feel, the sort of thing we expect to find on high-end US Fenders.  It was not quite the Custom Shop levels of finesse, of course, but sliding a finger and thumb down the neck revealed no sharp edges and the overall feel was impressive. 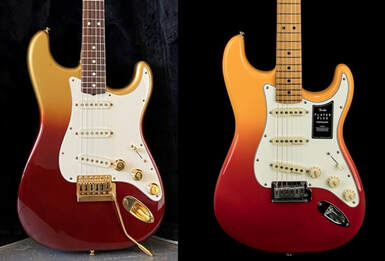 Comparison between a 1982 "The Strat" in Red Stratoburst finish (on the left) and a 2021 Player Plus Stratocaster in Tequila Sunrise (on the right)
Obviously, new eye-catching finishes were available. The new gradient bursts such as Tequila Sunrise, Belair Blue and Silver Smoke, which are very reminiscent of the Dan Smith-era Stratoburst colors used on the 1982 Strat, joined by metallic sparkle finishes in Cosmic Jade and Opal Spark, were doubtless designed to stand out on Social Media like TikTok, Instagram and YouTube, where a new generation of guitarists emerged.  Indeed, the launch of Player Plus also coincides with the debut of Fender's TikTok channel, for which it had teamed up with emerging artists who are popular on social networks.
Antonio Calvosa
For the debut of its TikTok channel teamed up with boundary-pushing artists such as The Destroy Boys, Gabriel Garzón-Montano and Blu DeTiger.