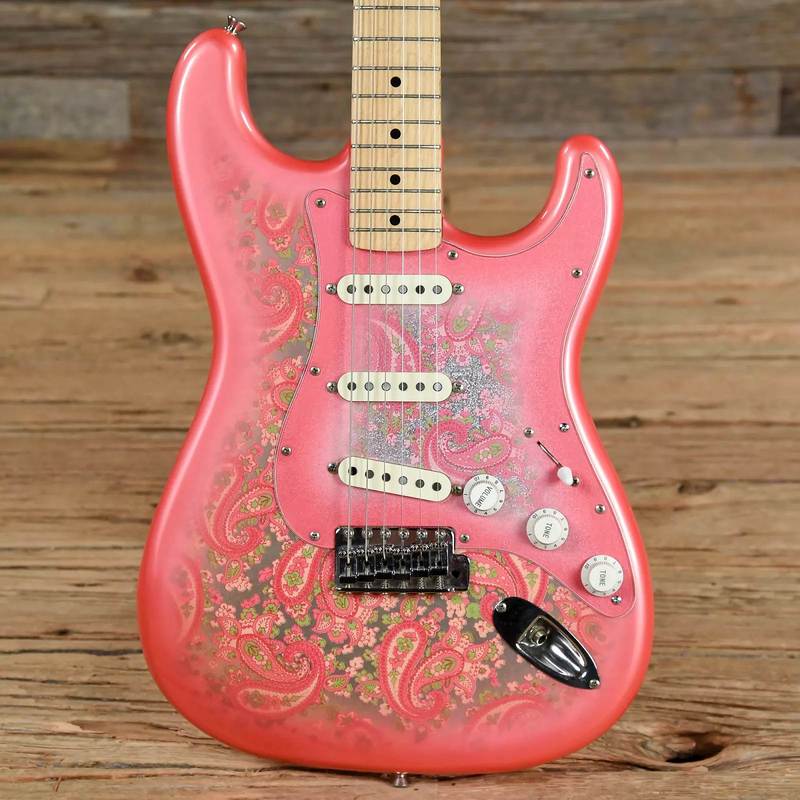 The ​Paisley Stratocaster and the Blue Flower Stratocaster (conceptually very similar to the first one, but with floral patterns) were made in a very simple way: Persian drops or flowers were printed on a thin high quality paper foil glued on the body’s top and back and on the pickguard.  A pink finish for the Paisley - blue for the Blue Flower - was sprayed on the sides to produce the burst effect.  Then the body was protected with a clear coat finish.
The response was great. Dan placed an order with Fujigen and gave Nick Sugimoto one of two precious original pieces of pink paisley foil embossed paper he had found at Fender. Nick gave the paper to a company in Tokyo which made an exact copy of the paper.
The first production instruments were of course Telecasters, but soon the large head Paisley Stratocaster ST72-125PRD was added to the list.  This first guitar was made between 1987 and 1989 only for the domestic Japanese market.  It featured a white ash body with a nitrocellulose clear coat and US Flat pole pickups.  Its finish tended to turn yellow over time thus significantly chancing the original color of the guitar. Later in 1988 the blue flower ST72-75BFL was also made.
However, limited edition export Pailsey Stratocaster and Blue Flower Stratocaster appeared in the catalog in late 1987 and 1988 respectively and remained there for a few years.  These guitars featured a basswood body (not white ash like the ST72-125PRD) with polyester finish and were equipped with different pickups.  Fender manufactured them again as limited editions in 2002-2003 and in 2008 (Paisley model #2 and Blue Flower model #2).
There were important differences between the export Paisley and the Blue Flower Strats of the '80s-'90s and the successive reissues.  The first ones had a’70 style big headstock with bullet truss rod and CBS Black logo, a 3-bolt neck plate with micro tilt, an 11-hole pickguard, Gotoh cast/sealed tuning machines and a die-cast bridge.  The 2002-2003 and 2008 ones had a small headstock with Spaghetti logo, a 4-bolt neck plate, an 8-hole pickguard, Kluson style tuning machines and a vintage style bridge. ​
Antonio Calvosa