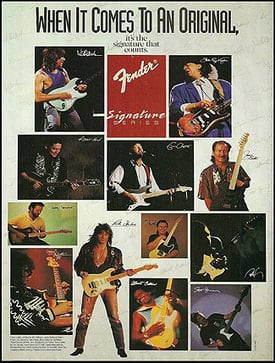 1993 Frontline
Since the beginning of its history Fender has shown in its catalog many musicians with their Jaguars, Piggybacks or steel guitars, but, unlike its most important competitors, made no Signatures until the late '80s.  Indeed Mary Kaye was a simple nickname that referred to all the blonde Stratocasters with golden hardware, while the 1980 Stratocaster with reverse headstock inspired by Jimi Hendrix appeared only a decade after the death of the legendary guitarist.  For this reason it must be considered a tribute rather than a signature.
Indeed, Fender's intention was not to ever release signature guitars.  The examples of the Gibson Les Paul being the only successful one as guitar players didn't know there was a real person called Les Paul and guitar shops scratching Joni Mitchell's name from her Ibanez signature model to improve sales were cited by Dan Smith as reasons for not doing Fender artist signature models because it was so much a Gibson thing and a Gretsch and not a Fender thing, until that is Dan Smith started working with John Hill in England with the great British guitarplayers and in particular Eric Clapton.
So why Fender changed its mind and introduced the new Signature Series guitars?
One of the first things Dan Smith did when he joined Fender in 1981 was contact the guy in England who knew all the UK luminary guitarists and who’d been writing memos trying to tell Fender Fullerton chief, Ed Llewellyn, that these pieces of wood made with furniture machinery were instruments that guitarists had an emotional relationship  with, and made magic.  John McLaren, new President of CBS Musical Instruments, replaced Llewellyn with Bill Schultz, brought a team from Yamaha America that included Dan Smith and formalized the relationship with the English Fender guy, John Hill, who worked in Brand Marketing, extending his remit to be Fender’s first Artist Relations and Brand Directors for Europe, and, in fact, the world.  They’d always let their sales division handle Artist Relations requests up to this point.  Tappy Wright used to phone Fender sales and ask if he could pickup six Strats from Manny’s.  Al Dutton, who worked for Jeff Beck, used to phone Fender sales and pickup three Strats from Manny’s for Jeff to use in New York, take them back to the hotel suite and make one good one by swapping parts and pickups and give two back.  It was of course Don Randal, Head of Fender Sales, who was dispatched to London to meet with Brian Epstein after these mop top Beatles started appearing on the Ed Sullivan Show (nine times) leading the ‘British Invasion’ of America without a Fender product in sight on stage. 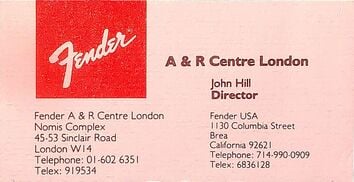 Something you don’t get to see unless you’re Eric Clapton or Steve Hackett: John Hill setup the very first Fender Artist Relations office in the world in London (Photo courtesy of John Hill)
Hill said it was the best thing that had ever happened at Fender when Dan Smith took up his new post as Director of Marketing and invited him over to meet the new team of Dan Smith, Bill Schultz and John McLaren.  McLaren was initially surprised, thinking he was the first Brit to work at corporate level for the biggest guitar brand in the world, to find that Hill had been working increasingly for the USA company from his base in England for some years and he wanted him to report directly to Dan and Bill.
Dan asked John Hill who he thought were the most influential Fender players and he replied without hesitating: David Gilmour, Eric Clapton, Jeff Beck, Jimmy Page, Ritchie Blackmore, Pete Townshend, Keith Richards, George Harrison, Andy Summers, Mark Knopfler, Hank Marvin, Dave Evans (The Edge), Richard Thompson, Johnny Marr, Steve Hackett, Steve Howe, Dave Murray, John McLaughlin, Alan Holdsworth, Stuart Adamson and Alan Murphy!  Dan said he didn’t mean the most influential in the UK, he meant in the world!  But John replied: “I meant in the world!  They just happen to be all from Great Britain (including The Edge) and I know all of them and have been supplying them with shirts and hats, pickups and parts, backup guitars, amps, oh and freebies to use in win a guitar competition promotional campaigns!”
Fender’s reputation at this point was broken after a decade of CBS exploitation of the brand without investing in quality control or new technology.  Consequently guitarists didn’t want to know about Fender.   So Hill’s hard work in trying to make Fender mean something to the greatest guitar players in the world, in the record label boardrooms, to the roadies and techs, and, most importantly, to the managers and artists themselves for the previous few years, was like gold to Dan Smith.  Make no mistake.  It wasn’t going to be easy to turn the brand reputation around, change the narrative and bring Fender back to life but, “If anyone could do it,” Hill stated, “Dan Smith could do it, he had so many great ideas, he was focused and his guitar knowledge was unsurpassed.”
At this point in time, contemporary Fender guitars were not making impact compared with other brands: Gilmour was playing vintage Fenders and Steinberger guitars, Clapton was playing vintage and Giffin guitars, Beck and Murray were playing Jacksons.  Furthermore, Fender had lower quality and efficiency from ageing, worn out jigs and machinery so was essentially competing with its own second hand market that was better and cheaper.
Fender had to relaunch itself by creating a strong emotional link between itself and the guitarists and recalling the musicians who had made the history of music with their pre-CBS Fenders and would continue to play the new and equally excellent post-CBS Fender, well that was the plan.
It was not by chance that one of the very first advertisements of the Eric Clapton signature model - the instrument with which this series was inaugurated - which appeared in the Rolling Stone magazine, said: “There's only one Eric Clapton... And there's only one Fender”.  This ad was worked out between Joe Phelps and Roger Forrester (Eric’s manager) with Hill as the go between. 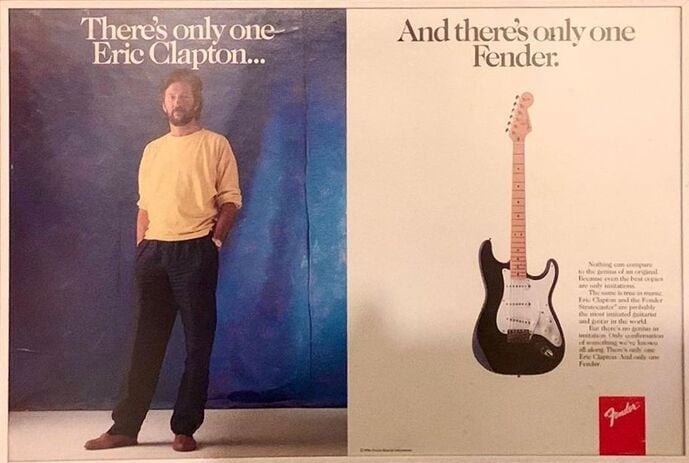 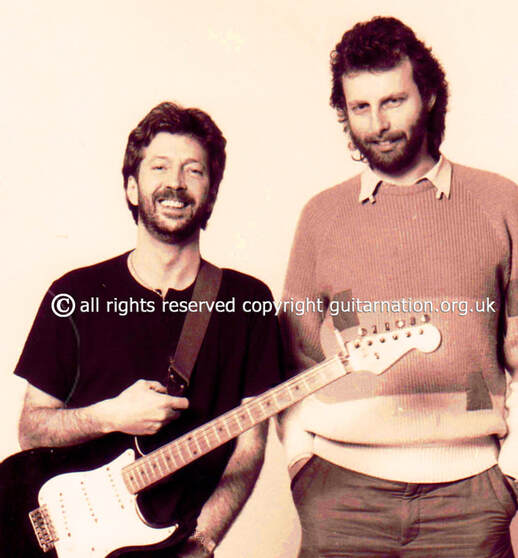 Eric, John and Blackie (Photo courtesy of John Hill)
The initial concept was to offer to each of the "Britpack" guitarists initially a custom made guitar for each of the endorsing artists targeted and a clone made of one of their most important instruments, an "Iconic Guitar", so that their treasured Fender from the pre-CBS era could be retired and replaced by the new custom guitar which represented the best Fender had ever produced.  John Hill purchased the Woodstock Strat for this purpose (to clone it) from Mitch Mitchell and Roger Forrester handed over Blackie to Hill to take over to Fender and as you can see with Blackie in the pictures here Hill headed up the Eric Clapton partnership with Fender and the relationship going forward.
The signatures idea started during negotiations with Clapton's manager Roger Forrester for a contract to use Eric's name and image with the provision of a custom built guitar.  But during negotiations Roger wanted to know why Fender didn't make more of the custom guitar, so they could give them to Clapton's friends like Ian Botham and Pete Townshend.  John Hill got the idea to put it into production and make it available to consumers.  At first Dan Smith and Bill Schultz weren't keen because they thought it was Gibson thing to sell the same guitars the artists used as signature guitars, they wanted to sell production guitars that the dealers had on the shop floor and besides it might not be possible to put custom made guitars into production particularly as in '85 there’s was no Fender USA production and no Custom Shop.
However John showed Roger Forrester, Bill Schultz and Dan Smith the Stewart Copeland advert he made, and they all said “let's put it in the contract”, so that they had the option to do something about it in future if the production facility planned was capable.  The signatures were born by merging elements of the individual Artist Custom Models idea with the Iconic Series Guitars idea and the nascent Clones projects. 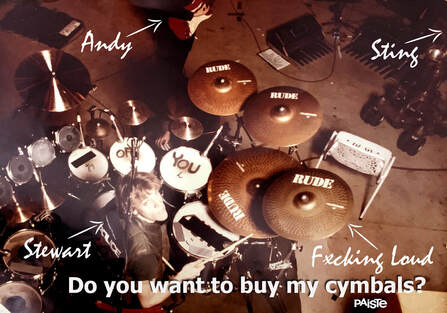 Stewart Copeland advert by John Hill Eric, John and Blackie (Photo courtesy of John Hill)
At first the Signatures included both factory and Custom Shop instruments, like the Robert Cray Stratocaster.  However, in the late '90s, Fender began to divide the signatures into Artist Series (for a while called Artist Signature Series) and Custom Artist Series, depending on whether they were factory or Custom Shop instruments.
​

The Signatures are instruments designed in collaboration with the musicians, which reproduced the specs of the Fender guitars that sported their name.  So, these guitars are not clones of the most important guitar of an artist.
In the '90s Fender also began to use the term Tribute to refer to both some Custom Shop guitars, like the Merle Haggard Telecaster and the Waylon Jennings, and some factory produced versions like the 1997 Jimi Hendrix Stratocaster.
Unlike the Signatures (or Artist guitars), which were guitars designed according to the specs suggested by living guitarists, the Tributes were at first guitars dedicated to deceased musicians; however, their meaning was soon extended to the replicas of guitars that, owned by still alive artists, marked the history of Fender, like those of Eric Clapton’s Blackie (2006) and Brownie (2013) or David Mayer’s Black One (2010).
The Tributes could be simple reproduction of stock guitars of the past, like the Mary Kaye Tribute Stratocaster (2005), or could be inspired by instruments heavily modified by the guitarist, like the Stevie Ray Vaughan's Number One (2004) and Lenny (2007), the Rory Gallagher Stratocaster (2004) or the Malmsteen's "Play Loud" (2008).
To make the “mojo” of these instruments and better match them with the artist, Fender often associated to the guitars specific road cases, CD, DVD, certificates, photos, books or posters.  They were usually made in limited editions, less than a hundred units, could be built by a single Master Builder or with the collaboration of many, and they were all sold in one or two days generally.
The price of these tributes was definitely high, but the earnings of Fender, in proportion, were not so important, if you consider the charges related to the extra-planning and the travels to meet the owners of the original guitars, the hours spent to analyze the instruments and to document all the phases, and, sometimes, even the time necessary to refine the production techniques.  According to Mike Eldred, the artist or his family earned more than Fender on the sales of a Tribute.